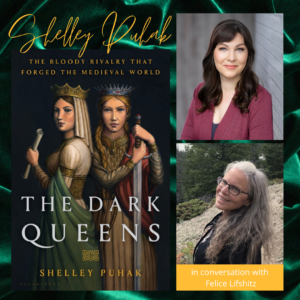 The Mark Twain House & Museum is excited to welcome poet and essayist Shelley Puhak in conversation with Professor Felice Lifshitz to discuss her nonfiction debut THE DARK QUEENS chronicling the remarkable, little-known story of two trailblazing women in the Early Middle Ages who wielded immense power, only to be vilified for daring to rule.

Brunhild was a foreign princess, raised to be married off for the sake of alliance-building. Her sister-in-law Fredegund started out as a lowly palace slave. And yet-in sixth-century Merovingian France, where women were excluded from noble succession and royal politics was a blood sport-these two iron-willed strategists reigned over vast realms, changing the face of Europe.

The two queens commanded armies and negotiated with kings and popes. They formed coalitions and broke them, mothered children, and lost them. They fought a decades-long civil war against each other. With ingenuity and skill, they battled to stay alive in the game of statecraft, and in the process laid the foundations of what would one day be Charlemagne’s empire. Yet after the queens’ deaths-one gentle, the other horrific-their stories were rewritten, their names consigned to slander and legend.

THE DARK QUEENS resurrects two very real women in all their complexity, painting a richly detailed portrait of an unfamiliar time and striking at the roots of some of our culture’s stubbornest myths about female power and offering proof that the relationships between women can transform the world.

Copies of THE DARK QUEENS signed by the author are available for purchase through the Mark Twain Store; proceeds benefit The Mark Twain House & Museum. Books will be shipped after the event. We regret that we are NOT able to ship books outside the United States as it is cost-prohibitive to do so.

Shelley Puhak is a poet and writer whose work is informed by her love of history. Her essays and articles have appeared in publications like The Atlantic, The Wall Street Journal, and Virginia Quarterly Review; been anthologized in Best American Travel Writing; and designated as Notable in four editions of Best American Essays. THE DARK QUEENS is her nonfiction debut.Shelley is also a former English professor and the author of three award-winning books of poetry. The most recent is HARBINGER, a National Poetry Series selection, forthcoming with Ecco/HarperCollins in October 2022.

Felice Lifshitz is a medieval historian now cross-appointed to Women’s and Gender Studies and to Religious Studies at the University of Alberta. Professor Lifshitz founded and, for many years, directed the Working Group for Pre-Modern Histories and Cultures at Florida International University (Miami, FL), dedicated to the comparative study of the Global Pre-Modern era. Among other endeavors, the Working Group hosted the 2005 annual meeting of the Medieval Academy of America in Miami Beach with a focus on that theme.

The majority of Lifshitz’s published scholarship is based on and revolves around the study of surviving manuscripts from Christian communities in Medieval western and central Europe. Although interested in many topics, two are particularly prominent: the construction and representation of the past, and the histories of women and gender.