THE FORBIDDEN BODY – Sex, Horror, and the Religious Imagination (VIRTUAL) 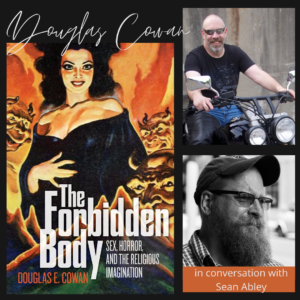 From creature features to indie horror flicks, find out what happens when sex, horror, and the religious imagination come together.

The Mark Twain House & Museum welcomes Professor Douglas Cowan to discuss his new book THE FORBIDDEN BODY with horror journalist Sean Abley. As illuminating as it is unsettling, THE FORBIDDEN BODY offers a fascinating look at how and why we imagine bodies in all the wrong places.

Throughout history, religion has attempted to control nothing so much as our bodies: what they are and what they mean; what we do with them, with whom, and under what circumstances; how they may be displayed—or, more commonly, how they must be hidden. Yet, we remain fascinated, obsessed even, by bodies that have left, or been forced out of, their “proper” place. The Forbidden Body examines how horror culture treats these bodies, exploring the dark spaces where sex and the sexual body come together with religious beliefs and tales of terror.

Taking a broad approach not limited to horror cinema or popular fiction, but embracing also literary horror, weird fiction, graphic storytelling, visual arts, and participative culture, Douglas E. Cowan explores how fears of bodies that are tainted, impure, or sexually deviant are made visible and reinforced through popular horror tropes. The volume challenges the reader to move beyond preconceived notions of religion in order to decipher the “religious imagination” at play in the scary stories we tell over and over again.

Cowan argues that stories of religious bodies “out of place” are so compelling because they force us to consider questions that religious belief cannot comfortably answer: Who are we? Where do we come from? Why do we suffer? And above all, do we matter?

Copies of THE FORBIDDEN BODY signed by the author are available for purchase through the Mark Twain Store; proceeds benefit The Mark Twain House & Museum. Books will be shipped after the event. We regret that we are NOT able to ship books outside the United States as it is cost-prohibitive to do so.

Douglas E. Cowan is Professor of Religious Studies and Social Development Studies at Renison University College. He is the author of Sacred Terror: Religion and Horror on the Silver Screen, Sacred Space: The Quest for Transcendence in Science Fiction Film and Television, and America’s Dark Theologian: The Religious Imagination of Stephen King.

Sean Abley is a horror journalist and author, screenwriter, and award-winning playwright. His bylines have appeared in Fangoria, The Advocate, Instinct, Attitude, and Unzipped. He created the “Gay of the Dead, ” a queer horror blog for Fangoria.com in 2009, and has continued to cover LGBTQIA+ horror ever since, including the book Out in the Dark: Interviews with Gay Horror Filmmakers, Actors and Authors, and culminating in the exhaustive Queer Horror Film Guide, available from McFarland Books in late 2022.