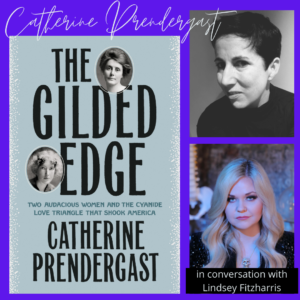 PICK YOUR POISON WEEK at The Mark Twain House & Museum kicks off with the true story of a torrid love triangle tainted by a touch of cyanide! The Gilded Edge author Catherine Prendergast is joined by Lindsey Fitzharris, the author of The Butchering Art.
About the book:
Nora May French and Carrie Sterling arrive at Carmel-by-the-Sea at the turn of the twentieth century with dramatically different ambitions. Nora, a stunning, brilliant, impulsive writer in her early twenties, seeks artistic recognition and bohemian refuge among the most celebrated counterculturalists of the era. Carrie, long-suffering wife of real estate developer George Sterling, wants the opposite: a semblance of the stability she thought her advantageous marriage would offer, now that her philandering husband has taken to writing poetry.After her second abortion, Nora finds herself in a desperate situation but is rescued by an invitation to stay with the Sterlings. To Carrie’s dismay, George and the arrestingly beautiful poetess fall instantly into an affair. The ensuing love triangle, which ultimately ends with the deaths of all three, is more than just a wild love story and a fascinating forgotten chapter. It questions why Nora May—in her day a revered poet whose nationally reported suicide gruesomely inspired youths across the country to take their own lives, with her verses in their pockets no less—has been rendered obscure by literary history. It depicts America at a turning point, as the Gilded Age groans in its death throes and young people, particularly young women, look toward a bright, progressive, more egalitarian future.
FREE lunchtime virtual event, although donations are gratefully accepted. REGISTER HERE.
Copies of The Gilded Edge signed by the author are available for purchase through the Mark Twain Store; proceeds benefit The Mark Twain House & Museum. Books will be shipped after the event. We regret that we are NOT able to ship books outside the United States as it is cost-prohibitive to do so.
————-
About Dr. Catherine Prendergast:

Catherine Prendergast is a Professor of English at the University of Illinois at Urbana-Champaign, a Guggenheim Fellow, and a Fulbright Scholar. Interviewed by NPR and New York Magazine, she has written on battles over school desegregation, anxieties over the global spread of English, and recognition of disability rights. Originally from New Jersey, she can now be found amidst the cornfields of the Midwest with her husband and son.

About Dr. Lindsey Fitzharris:
Dr. Lindsey Fitzharris is a bestselling author, television host, and medical historian with a doctorate from Oxford University. Her debut book, The Butchering Art, won the PEN/E.O. Wilson Award for Literary Science and has been translated into twenty languages. Dr Fitzharris writes regularly for a variety of publications, including The Wall Street Journal, Scientific America, The Guardian, The Lancet, and New Scientist. Her new television series on the Smithsonian Channel, The Curious Life and Death of…, explores some of the most mysterious deaths in history.
Programs at The Mark Twain House & Museum are made possible in part by support from the Connecticut Department of Economic and Community Development, Office of the Arts, and the Greater Hartford Arts Council’s United Arts Campaign and its Travelers Arts Impact Grant program, with major support from The Travelers Foundation. For more information call 860-247-0998 or visit marktwainhouse.org