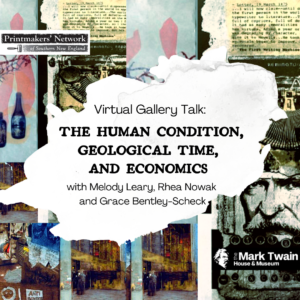 Finding so many of Mark Twain’s quotes to be particularly relevant to life in the 21st century and the challenges we face in this uncertain time of Covid, Melody Leary was struck by the number of quotes that resonated with her on a personal level. Her virtual talk will focus on her artistic response to the quotes that inspired her work and include a bit about her printmaking process.

Rhea Nowak will be talking about how she thought about and responded to the quote she choose, “Geologic time is not money”. She will talk about metaphors worked with, techniques chosen and how she developed compositions.

Having been moved by tie plight of workers who, due to the pandemic, lost jobs and subsequently rental housing, Grace Bentley-Scheck will speak about her response to the Twain quote from A Connecticut Yankee in King Arthur’s Court:  “It isn’t the sum you get, it’d how much you can buy with it, that’s the important thing, and it’s that that tells whether your wages are in fact or only high in name”.  She will explain how the message of the image is achieved in the plate, a collagraph with silk aquatint. She will show a variety of other prints.

The Evocative Mark Twain Inspires the Printmakers’ Network of Southern New England is on view at The Mark Twain House & Museum beginning March 24, 2022 through January 23, 2023. The museum is open daily from 10 AM to 4:30 PM. Admission to the exhibition is included in house tour admission; museum center-only tickets including The Evocative Mark Twain… is $7.25. For information and tour reservations, please CLICK HERE.

Working out of her southeastern Connecticut home-based studio, Melody’s primary medium is printmaking, with a focus on less toxic processes. She holds a BFA from the University of Hartford Art School and a Master’s Degree from Central Connecticut State College. After a rewarding teaching career as an art educator, she now concentrates her energies on her own studio practice.

A longtime member of The Printmakers’ Network of Southern New England, Melody is also a member of The Boston Printmakers, the Society of American Graphic Artists, the Friends of Slater Museum, and the Connecticut Academy of Fine Arts. Melody’s award-winning work has been exhibited nationally and internationally and is included in both public and private collections.

Rhea received her BA from Bennington College in Printmaking and Painting, her MFA from the University of Connecticut in Printmaking and Drawing, and a Master Printer Certificate from Il Bisonte, in Florence, Italy. She is a Professor at the SUNY College at Oneonta where she teaches printmaking, design, artist’s books, and a collaborative art projects course. Her work been exhibited in juried and solo exhibitions in the U.S. and Europe. Other projects include Trialogs, a collaborative DVD of images and sound with Julie Licata, percussionist, and Bret Masteller, electronic musician.

Grace Bentley-Scheck was born in Troy, New York and now lives in Narragansett, Rhode Island where she maintains her studio, Sassafras Press.  She holds BFA and MFA degrees from the State University of New York at Alfred University.  Her work has been exhibited in the United States, Poland, Germany, Austria, Japan, Great Britain, Ireland, the Czech Republic, and Australia and is included in many private and public collections including the Portland Art Museum, Rhode Island.

Her work is generally about architecture.  She is interested in the geometry of architectural space and evidence that buildings have passed through time as manifest in weathering or human marks like painted advertising. She begins with photographs which she manipulates with the crop tool in Photoshop to establish a composition. Then she makes a drawing on tracing paper.  The drawing is used to trace paper shapes that will become part of the plate. The edges of these shapes will print as lines.  She adheres silk organza over the wh0le surface of the plate.  When dry, she can paint on it to create values.