THE MAN WHO HATED WOMEN: Amy Sohn in conversation with Susan Campbell 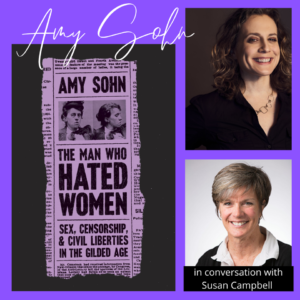 The New York Times–bestselling author Amy Sohn presents a narrative history of Anthony Comstock, anti-vice activist and U.S. Postal Inspector, and the remarkable women who opposed his war on women’s rights at the turn of the twentieth century. Comstock’s eponymous law, passed in 1873, penalized the mailing of contraception and obscenity with long sentences and steep fines. The word Comstockery came to connote repression and prudery.

Between 1873 and Comstock’s death in 1915, eight remarkable women were charged with violating state and federal Comstock laws. These “sex radicals” supported contraception, sexual education, gender equality, and women’s right to pleasure. They took on the fearsome censor in explicit, personal writing, seeking to redefine work, family, marriage, and love for a bold new era. In The Man Who Hated Women, Amy Sohn tells the overlooked story of their valiant attempts to fight Comstock in court and in the press. They were publishers, writers, and doctors, and they included the first woman presidential candidate, Victoria C. Woodhull; the virgin sexologist Ida C. Craddock; and the anarchist Emma Goldman. In their willingness to oppose a monomaniac who viewed reproductive rights as a threat to the American family, the sex radicals paved the way for second-wave feminism. Risking imprisonment and death, they redefined birth control access as a civil liberty.

Joining Amy Sohn in conversation will be Pulitzer Prize-winning journalist and author Susan Campbell.
FREE virtual program, but donations are gratefully accepted. REGISTER HERE.
Signed copies of The Man Who Hated Women will be available for purchase through the Mark Twain Store; proceeds benefit The Mark Twain House & Museum. Books will be shipped after the event. We regret that we are NOT able to ship books outside the United States as it is cost-prohibitive to do so.
——————
Amy Sohn is the New York Times–bestselling author of several novels, including Prospect Park West, Motherland, and The Actress. A former columnist at New York magazine, she has also written for Harper’s Bazaar,Elle, The Nation, and The New York Times. She has been a writing fellow at Headlands Center for the Arts, Writers Omi, and the Studios at MASS MoCA. A native New Yorker, she lives in Brooklyn with her daughter.
Susan Campbell is a distinguished lecturer at the University of New Haven’s Department of Communication, Film and Media Studies. She is also a columnist for Hearst newspapers in Connecticut. She is also an award-winning author of Dating Jesus: Fundamentalism, Feminism, and the American Girl, and the biography, Tempest-Tossed: The Spirit of Isabella Beecher Hooker. Her latest book, Frog Hollow: Stories From an American Neighborhood, was published by Wesleyan University Press in March 2019. The mother of two adult sons, and the grandmother of seven, she has a bachelor’s degree from University of Maryland, and a master’s degree from Hartford Seminary.