THE MAN WHO INVENTED MOTION PICTURES: A True Tale of Obsession, Murder, and The Movies 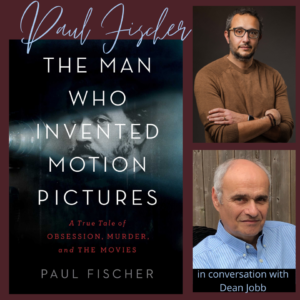 The Mark Twain House & Museum welcomes returning author Paul Fischer to discuss his new book THE MAN WHO INVENTED MOTION PICTURES: A TRUE TALE OF OBSESSION MURDER AND THE MOVIES, a page-turning history about the invention of the motion picture and the mysterious man behind it—detailing his life, work, disappearance, and legacy. Paul is joined in conversation by award-winning true crime author Dean Jobb.

The year is 1888 and Louis Le Prince is finally testing his “taker” or “receiver” device for his family on their front lawn. The device is meant to capture ten to twelve images per second on film, creating a reproduction of reality that can be replayed as many times as desired. In an otherwise separate and detached world, occurrences from one end of the globe could now be viewable with only a few days delay on the other side of the world. No human experience—from the most mundane to the most momentous—would need to be lost to history.

In 1890, Le Prince was granted patents in four countries ahead of other inventors who were rushing to accomplish the same task. But just weeks before unveiling his invention to the world, he mysteriously disappeared and was never seen or heard from again. Three and a half years later, Thomas Edison, Le Prince’s rival, made the device public, claiming to have invented it himself. And the man who had dedicated his life to preserving memories was himself lost to history—until now.

THE MAN WHO INVENTED MOTION PICTURES pulls back the curtain and reveals the riveting story of both Louis Le Prince’s life and work, dispelling the secrets that shroud each. This captivating, impeccably researched work presents the never before told history of the motion picture and sheds light on the unsolved mystery of Le Prince’s disappearance.

Copies of THE MAN WHO INVENTED MOTION PICTURES signed by the author are available for purchase through the Mark Twain Store; proceeds benefit The Mark Twain House & Museum. Books will be shipped after the event. We regret that we are NOT able to ship books outside the United States as it is cost-prohibitive to do so.

Paul Fischer is an author and film producer based in the United Kingdom. His first book, A Kim Jong-Il Production has been translated to date into twelve languages. It was nominated for the Crime Writers’ Association’s Nonfiction Book Award. It was chosen as an Amazon Best of the Year Nonfiction Selection, one of Library Journal’s Top Ten Books of the Year, and one of NPR’s Best Books of The Year. It was also nominated for a Goodreads Choice Award for History & Biography. Paul has also written for the New York Times, Los Angeles Times, and The Independent, amongst others. In addition to writing, he works as a film producer and is an alumni of the Guiding Lights mentorship program. His first feature screenplay, The Body, based on a short film of his conception, was produced by Blumhouse and Hulu in 2018, starring Tom Bateman (Vanity Fair), Rebecca Rittenhouse (The Mindy Project), Aurora Perrineau (Truth or Dare), David Hull (Crazy Ex-Girlfriend), and Ray Santiago (Ash vs. Evil Dead).

Dean Jobb is an award-winning author and journalist and a professor at the University of King’s College in Halifax, Nova Scotia, where he teaches in the Master of Fine Arts in Creative Nonfiction program. He specializes in true crime and writes a monthly column on the genre, “Stranger Than Fiction,” which appears in Ellery Queen’s Mystery Magazine. Jobb’s articles and book reviews appear in CrimeReads, Inside History magazine, the Chicago Review of Books, and the Washington Independent Review of Books. During his 35-year career as a newspaper staff writer and freelance journalist he has written features and commentaries on an array of subjects – history, current events, law, business, politics, media ethics, science, travel, and the craft of nonfiction.