THE MAN WHO MADE MARK TWAIN FAMOUS: Cappy McGarr with Colin McEnroe 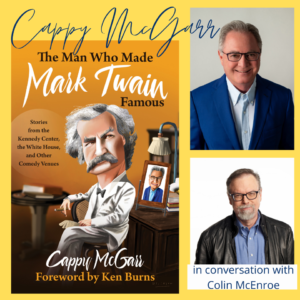 Although we may take exception to the title, there is no denying that Cappy McGarr has helped Mark Twain STAY famous with the creation of the Kennedy Center Mark Twain Prize for American Humor. The host of WNPR’s The Colin McEnroe Show discusses the behind-the-scenes drama and laughter behind the creation of American humor’s highest honor.

In The Man Who Made Mark Twain Famous, Cappy McGarr shares how he  became an Emmy-nominated founder/executive producer of the Kennedy Center Mark Twain Prize for American Humor, and got involved in national politics—all with charming southern style and a self-deprecating sense of humor. For decades, Cappy McGarr has been in the room where it happens. With The Man Who Made Mark Twain Famous, he’d like to invite you into that room, complete with his color commentary on the other folks inside.

Cappy also gives the inside scoop on several shows he produced from the East Room of the White House, including the Gershwin Prize for Popular Song. Plus, he tells tales from his involvement in national politics—including encounters with the likes of President Lyndon B. Johnson, Senate Majority Leader Tom Daschle, Governor Ann Richards, President George W. Bush, President Barack Obama, and many others.

“Reading Cappy’s book is not unlike sitting down to dinner with him and listening to the stories he has picked up from decades of rubbing elbows with political leaders and comedians alike. There are historic set pieces. There are laughs and howls and chuckles and chortles.” —Ken Burns

FREE virtual program, although donations are gratefully accepted. REGISTER HERE.
Signed copies of The Man Who Made Mark Twain Famous will be available for purchase through the Mark Twain Store; proceeds benefit The Mark Twain House & Museum. Books will be shipped after the event. We regret that we are NOT able to ship books outside the United States as it is cost-prohibitive to do so.
————————
About the Author:

Cappy McGarr is an Emmy-nominated co-creator of the Kennedy Center Mark Twain Prize for American Humor, and the Library of Congress Gershwin Prize for Popular Song. He’s one of few people to be appointed by two different presidents to the Kennedy Center. His writing has been published in The New York Times, Politico, and USA Today.

Colin McEnroe is a radio host, newspaper columnist, magazine writer, author, playwright, lecturer, moderator, college instructor and occasional singer. He started as a radio host in 1992 and moved to CT Public in 2009. His writing has appeared in The New York Times, the Hartford Courant, many Hearst newspapers, Men’s Health, Cosmopolitan, Forbes FYI, Mademoiselle, Mirabella, Backpacking, Bicycling, and McSweeney’s. He teaches in the political science department at Yale. As an onstage interviewer and moderator, he has shared the stage with Stephen King, Anthony Bourdain, Joyce Carol Oates, Kurt Vonnegut, Tig Notaro, Marc Maron, Amy Tan, Bob Woodward, Tim Gunn, Alice Waters, Al Franken, Molly Ivins, Anita Hill and many others. He is allergic to penicillin. He dislikes coffee mugs that are black or any dark color. He finds them very upsetting.