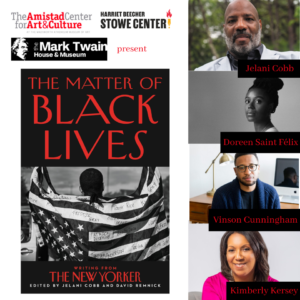 Amistad Center for Art & Culture, the Harriet Beecher Stowe Center and The Mark Twain House & Museum present an important conversation on THE MATTER OF BLACK LIVES, a collection of The New Yorker‘s groundbreaking writing on race in America. Moderated by Amistad Center Executive Director Kimberly Kersey, the discussion will include editor Jelani Cobb and contributors Doreen St. Félix and Vinson Cunningham.

This anthology from the pages of the New Yorker provides a bold and complex portrait of Black life in America, told through stories of private triumphs and national tragedies, political vision and artistic inspiration. It reaches back across a century, with Rebecca West’s classic account of a 1947 lynching trial and James Baldwin’s “Letter from a Region in My Mind” (which later formed the basis of The Fire Next Time), and yet it also explores our current moment, from the classroom to the prison cell and the upheavals of what Jelani Cobb calls “the American Spring.” Bringing together reporting, profiles, memoir, and criticism from writers such as James Baldwin, Toni Morrison, Ta-Nehisi Coates, Zadie Smith, Chimamanda Ngozi Adichie, Elizabeth Alexander, Hilton Als, Henry Louis Gates, Jr., Malcolm Gladwell, Jamaica Kincaid, Kelefa Sanneh, and others, the collection offers startling insights about this country’s relationship with race. The Matter of Black Lives reveals the weight of a singular history, and challenges us to envision the future anew.

FREE virtual event with donations split evenly between the Amistad Center, Stowe Center and The MTH&M. REGISTER HERE.
Copies of THE MATTER OF BLACK LIVES signed by Jelani Cobb are available for purchase through the Mark Twain Store; proceeds benefit The Mark Twain House & Museum. Books will be shipped after the event. We regret that we are NOT able to ship books outside the United States as it is cost-prohibitive to do so.
—————————
Jelani Cobb has been contributing to The New Yorker since 2012, and became a staff writer in 2015. He writes frequently about race, politics, history, and culture. His most recent book is The Substance of Hope: Barack Obama and the Paradox of Progress. He won the 2015 Sidney Hillman Prize for Opinion and Analysis Journalism, for his columns on race, the police, and injustice. He teaches at Columbia University’s Graduate School of Journalism.
Doreen St. Félix has been a staff writer at The New Yorker since 2017 and was named the magazine’s television critic in 2019. Previously, she was a culture writer at MTV News. Her writing has appeared in the Times Magazine, New York, Vogue, The Fader, and Pitchfork. In 2017, she was a finalist for a National Magazine Award for Columns and Commentary, and, in 2019, she won in the same category.
Vinson Cunningham joined The New Yorker as a staff writer in 2016. Since 2019, he has served as a theatre critic for the magazine. In 2020, he was a finalist for a National Magazine Award for his Profile of the comedian Tracy Morgan. His writing on books, art, and culture has appeared in the Times Magazine, the Times Book Review, Vulture, the Awl, The Fader, and McSweeney’s, where he wrote a column called “Field Notes from Gentrified Places.” Cunningham previously served as a staff assistant at the Obama White House.
Programs at The Mark Twain House & Museum are made possible in part by support from the Connecticut Department of Economic and Community Development, Office of the Arts, and the Greater Hartford Arts Council’s United Arts Campaign and its Travelers Arts Impact Grant program, with major support from The Travelers Foundation. For more information call 860-247-0998 or visit marktwainhouse.org