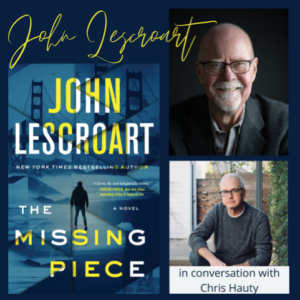 Screenwriter and thriller novelist Chris Hauty joins New York Times-bestseller John Lescroart to discuss Lescroart’s new, relentlessly twisty murder thriller.
No one mourned when San Francisco DA Wes Farrell put Paul Riley in prison eleven years ago for the rape and murder of his girlfriend. And no one is particularly happy to see him again when he’s released after The Exoneration Initiative uncovered evidence that pinned the crime on someone else. In fact, Riley soon turns up murdered, surrounded by the loot from his latest scam. But if Riley was really innocent all along, who would want him dead?
To the cops, it’s straightforward: the still-grieving father of Riley’s dead girlfriend killed the former prisoner. Farrell, now out of politics and practicing law with master attorney Dismas Hardy, agrees to represent the defendant, Doug Rush—and is left in the dust when Rush suddenly vanishes. At a loss, Farrell and Hardy ask PI Abe Glitsky to track down the potentially lethal defendant. The search takes Glitsky through an investigative hall of mirrors populated by wounded parents, crooked cops, cheating spouses, and single-minded vigilantes. As Glitsky embraces and then discards one enticing theory of the crime after another, the truth seems to recede ever farther. So far that he begins to question his own moral compass, allowing author John Lescroart to explore what The Washington Post calls “the genuine humanism that [is] central to his writing.”
FREE virtual program, although donations are gratefully accepted. REGISTER HERE.
Signed copies of The Missing Piece will be available for purchase through the Mark Twain Store; proceeds benefit The Mark Twain House & Museum. Books will be shipped after the event. We regret that we are NOT able to ship books outside the United States as it is cost-prohibitive to do so.
————-
About the Author:
John Lescroart is the author of twenty-nine novels (his thirtieth, The Missing Piece, will be published by Atria this November), nineteen of which have been New York TimesBestsellers.  Libraries Unlimited has named John among “The 100 Most Popular Thriller and Suspense Authors.” With sales of over twelve million copies, his books have been translated into twenty-two languages in more than seventy-five countries, and his short stories appear in many anthologies.
About the Moderator:

Chris Hauty was born in 1956 in San Antonio, Texas, and raised in Delaware, a geographic and cultural relocation made more tolerable by virtue of his relative youth and an obsession with Greek mythology. He graduated from Reed College, in Portland, Oregon, then moved to New York, where he supported his playwriting habit as a bike messenger and graphic artist. His plays produced Off-Off-Broadway included South of American Business and Shut Eye, Big Mouth. The sale of his first screenplay, Don Coyote, to 20th Century Fox prompted a move to Los Angeles. Employed for the last thirty years as a screenwriter, he has worked for every major movie studio, in nearly all genres, and in collaboration with Hollywood professionals ranging from Mel Gibson to Jessica Alba.