The MTH&M and National Cowboy and Western Heritage Museum present WOMEN OF THE AMERICAN WEST: A Lunchtime Conversation (Virtual) 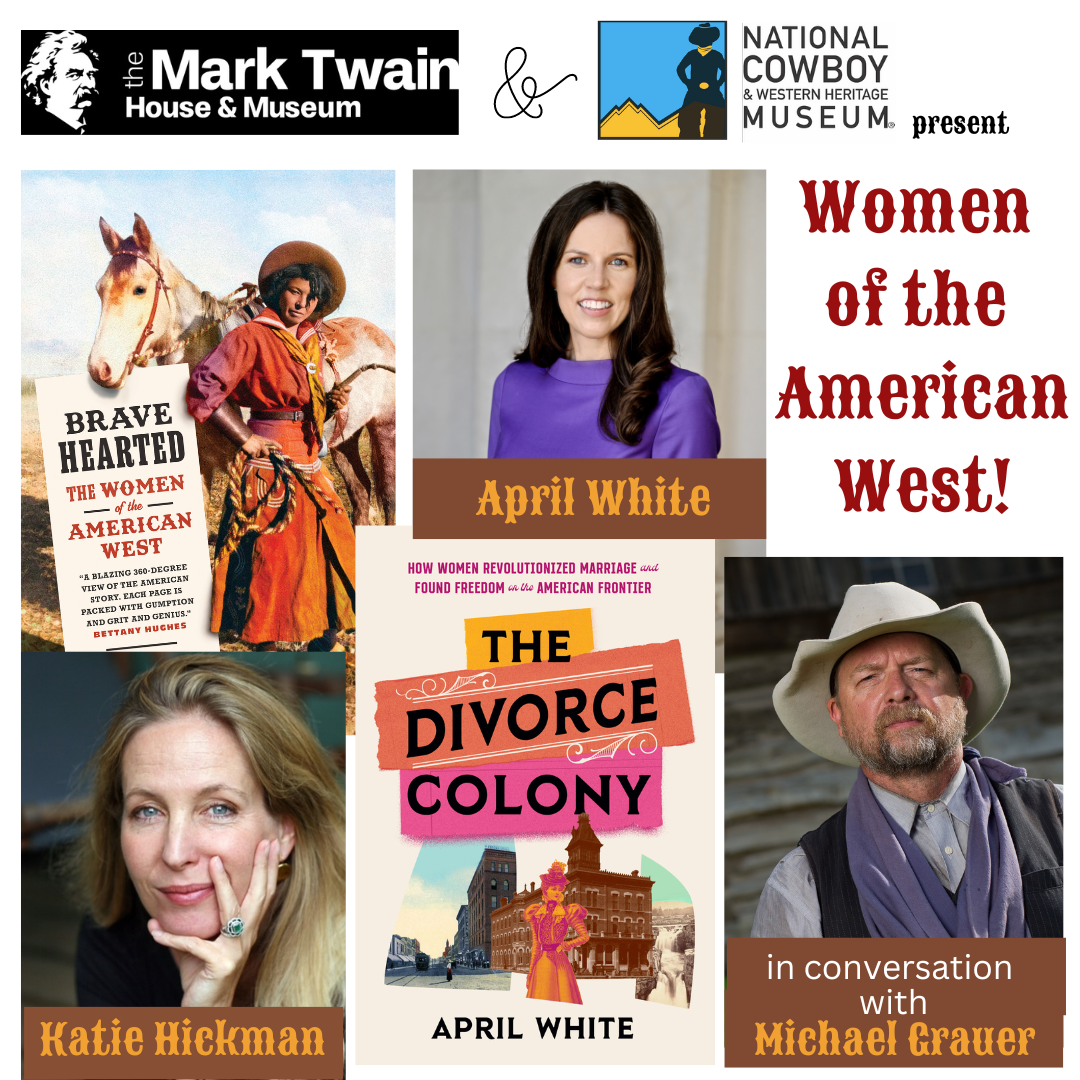 After the outbreak of the Civil War, Samuel Clemens skedaddled out West to find fame, fortune and, eventually, his literary persona: Mark Twain. Sam was far from the only person out “roughing it” after lighting out for the territories. Women saddled up and forged their own place in the American West. With WOMEN OF THE AMERICAN WEST, a virtual lunchtime discussion, The Mark Twain House & Museum and the National Cowboy and Western Heritage Museum set out to explore these pioneering, adventurous and oft-neglected women as chronicled in two new books: BRAVE HEARTED: The Women of the American West by Katie Hickman and THE DIVORCE COLONY by April White. Joining the authors for this lunchtime virtual conversation will be Michael Grauer, the McCasland Chair of Cowboy Culture and Curator of Cowboy Collections and Western Art at the National Cowboy and Western Heritage Museum.

Hard-drinking, hard-living poker players and prostitutes of the new boom towns; wives and mothers traveling two and a half thousand miles across the prairies in covered-wagon convoys, some of them so poor they walked the entire route; African-American women in search of freedom from slavery; Chinese sex-workers sold openly on the docks of San Francisco; Native American women brutally displaced by the unstoppable tide of white settlers — all were women forced to draw on huge reserves of resilience and courage in the face of tumultuous change.

Drawing on letters, diaries, and other extraordinary contemporary accounts, sifting through the legends and the myths, the laws and the treaties, Katie Hickman presents us with cast of unforgettable women. This is the story of the women who participated in the greatest mass migration in American history, transforming their country in the process.  This is American history, not as it was romanticized, but as it was lived.

ABOUT THE DIVORCE COLONY:

For a woman traveling without her husband in the late nineteenth century, there was only one reason to take the train all the way to Sioux Falls, South Dakota, one sure to garner disapproval from fellow passengers. On the American frontier, the new state offered a tempting freedom often difficult to obtain elsewhere: divorce.

With the laxest divorce laws in the country, five railroad lines, and the finest hotel for hundreds of miles, the small city became the unexpected headquarters for unhappy spouses—infamous around the world as The Divorce Colony. These society divorcees put Sioux Falls at the center of a heated national debate over the future of American marriage. As clashes mounted in the country’s gossip columns, church halls, courtrooms and even the White House, the women caught in the crosshairs in Sioux Falls geared up for a fight they didn’t go looking for, a fight that was the only path to their freedom.

Entertaining, enlightening, and utterly feminist, The Divorce Colony is a rich, deeply researched tapestry of social history and human drama that reads like a novel. Amidst salacious newspaper headlines, juicy court documents, and high-profile cameos from the era’s most well-known players, this story lays bare the journey of the turn-of-the-century socialites who took their lives into their own hands and reshaped the country’s attitudes about marriage and divorce.

Copies of BRAVE HEARTED and THE DIVORCE COLONY are available for purchase through the Mark Twain Store; proceeds benefit The Mark Twain House & Museum. Books will be shipped after the event. We regret that we are NOT able to ship books outside the United States as it is cost-prohibitive to do so.

Katie Hickman is the best-selling author of ten books. Her most recent work, Brave Hearted, was preceded by She-Merchants, Buccaneers and Gentlewomen: British Women in India 1600 – 1900 (published in 2019), and by the highly-acclaimed series of novels, The Aviary Gate, The Pindar Diamond and The House at Bishopsgate, a trilogy set in early seventeenth century Constantinople, Venice, London, and rural Wiltshire.

She is also the author of two best-selling history books, Courtesans and Daughters of Britannia, which between them have sold more than quarter of a million copies worldwide. Her other works include two travel books, Travels with a Mexican Circus (republished by Bloomsbury in August 2014) which was shortlisted for the Thomas Cook Travel Book Award in 1993, and Dreams of the Peaceful Dragon, the story of a journey on horseback across the forbidden Himalayan kingdom of Bhutan. Her first novel, The Quetzal Summer, was shortlisted for the Sunday Times Young British Writer of the Year Award. Her books have been translated into 20 languages.

Katie Hickman lives on a converted barge on the Thames in London with her partner, the designer Matthew Ruscombe-King.

April White is a senior writer and editor at Atlas Obscura. She previously worked as an editor at Smithsonian Magazine. She holds a master’s degree in history and her work has appeared in publications including the Washington Post, The Atavist Magazine, and JSTOR Daily, where she wrote a regular column on the history of food,. She lives in Washington, DC.

He worked at the Smithsonian American Art Museum, before becoming curator of art and Western heritage and associate director for curatorial affairs at the Panhandle-Plains Historical Museum, Canyon, Texas, from 1987 to 2018. He was also Adjunct Lecturer in Western American Studies at West Texas A&M University. He joined the National Cowboy & Western Heritage Museum in Oklahoma City in September 2018.

He has curated over 150 exhibitions on Western art, culture, and history, including “Women Artists of Texas, 1850-1950” (1993); “Women Artists of Santa Fe” (2004); “Of This Vast State: Women Artists of Texas” (2006); “Madonnas of the Prairie: Depictions of Women in the American West” (2014); and “Blazing a Trail: Western Women’s Quest for Equal Treatment” (2020). His “Caballeros y Vaqueros: Origins of Western Horse Culture,” at the National Cowboy Museum 2019-2020, received the American Association for State and Local History (AASLH) Award of Excellence for Leadership in History; and 2021’s “The Santa Fe Trail: 1821-2021” an exhibition on the history of the international trail during the bicentennial year.