THE ONLY GOOD INDIANS: Stephen Graham Jones in conversation with Joe R. Lansdale

A tale of revenge, cultural identity, and the cost of breaking from tradition. 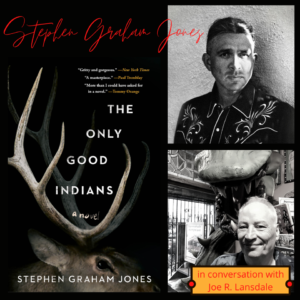 The Only Good Indians follows four American Indian men after a disturbing event from their youth puts them in a desperate struggle for their lives. Tracked by an entity bent on revenge, these childhood friends are helpless as the culture and traditions they left behind catch up to them in a violent, vengeful way.

Stephen Graham Jones is the New York Times bestselling author of twenty-five or so novels and collections, and there’s some novellas and comic books in there as well. Stephen’s been an NEA recipient, has won the Texas Institute of Letters Award for Fiction, the Independent Publishers Award for Multicultural Fiction, a Bram Stoker Award, four This is Horror Awards, and he’s been a finalist for the Shirley Jackson Award and the World Fantasy Award. He’s also made Bloody Disgusting’s Top Ten Horror Novels, and is the guy who wrote Mongrels and The Only Good Indians. Next up is My Heart is a Chainsaw. Stephen lives in Boulder, Colorado.

Jones will be appearing in conversation with beloved Champion Mojo Storyteller Joe R. Lansdale, who has written novels and stories in many genres, including Western, horror, science fiction, mystery, and suspense. He has also written for comics as well as “Batman: The Animated Series.” As of 2020, he has written 50 novels and published more than 30 short-story collections (maybe 40 by now?!) along with many chapbooks and comic-book adaptations.

Signed copies of The Only Good Indians will be available for purchase through the Mark Twain Store; proceeds benefit The Mark Twain House & Museum.We regret that we are NOT able to ship books outside the United States as it is cost-prohibitive to do so.