THE RACE TO RESCUE THE R.M.S. TITANIC with author William Hazelgrove and Jason Scappaticci 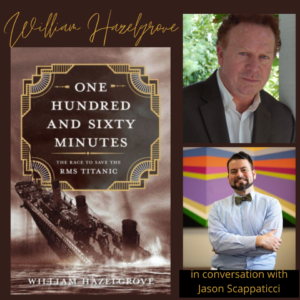 Historian and novelist William Hazelgrove discusses his newest book, ONE HUNDRED AND SIXTY MINUTES: The Race to Save the R.M.S. Titanic with historian and former MTH&M Interpreter Jason Scappaticci.

One hundred and sixty minutes. That is all the time rescuers would have before the largest ship in the world slipped beneath the icy Atlantic. There was amazing heroism and astounding incompetence against the backdrop of the most advanced ship in history sinking by inches with luminaries from all over the world. It is a story of a network of wireless operators on land and sea who desperately sent messages back and forth across the dark frozen North Atlantic to mount a rescue mission. More than twenty-eight ships would be involved in the rescue of Titanic survivors along with four different countries.

At the heart of the rescue are two young Marconi operators, Jack Phillips 25 and Harold Bride 22, tapping furiously and sending electromagnetic waves into the black night as the room they sat in slanted toward the icy depths and not stopping until the bone numbing water was around their ankles. Then they plunged into the water after coordinating the largest rescue operation the maritime world had ever seen and thereby saving 710 people by their efforts.

The race to save the largest ship in the world from certain death would reveal both heroes and villains. It would begin at 11:40 PM on April 14, when the iceberg was struck and would end at 2:20 AM April 15, when her lights blinked out and left 1500 people thrashing in 25-degree water. Although the race to save Titanic survivors would stretch on beyond this, most people in the water would die, but the amazing thing is that of the 2229 people, 710 did not and this was the success of the Titanic rescue effort.

FREE virtual event, although donations are gratefully accepted. REGISTER HERE.
Copies of One Hundred and Sixty Minutes: The Race to Save the RMS Titanic signed by the author are available for purchase through the Mark Twain Store; proceeds benefit The Mark Twain House & Museum. Books will be shipped after the event. We regret that we are NOT able to ship books outside the United States as it is cost-prohibitive to do so.
———————
ABOUT THE AUTHOR
William Hazelgrove is the National Bestselling author of ten novels and seven nonfiction titles. His books have received starred reviews in Publisher Weekly Kirkus, Booklist, Book of the Month Selections, ALA Editors Choice Awards Junior Library Guild Selections, Literary Guild Selections, History Book Club Selections and optioned for the movies. He was the Ernest Hemingway Writer in Residence where he wrote in the attic of Ernest Hemingway’s birthplace. He has written articles and reviews for USA Today, The Smithsonian Magazine, and other publications and has been featured on NPR All Things Considered. The New York Times, LA Times, Chicago Tribune, CSPAN, USA Today have all covered his books with features. His books Tobacco Sticks, (represented by Joel Gotler) The Pitcher, Real Santa, and Madam President have been optioned for screen and television rights. His book Madam President The Secret Presidency of Edith Wilson is currently in development. The option on The Pitcher was fully executed when the script was approved. He has four forthcoming books. Sally Rand American Sex Symbol, Morristown The Kidnapping of George Washington. The Brilliant Con of Cassie Chadwick. One Hundred and Sixty Minutes, the Race to Save the Titanic.
ABOUT THE MODERATOR

Jason Scappaticci was born and raised in Manchester, CT where he continues to live with his partner and son. After high school he earned his BA in History from Utica College of Syracuse University. After returning home to CT he enrolled in Trinity College and earned his MA in American Studies. He has a passion for history and enjoys sharing that passion with others. Some topics of particular interest for Jason are presidential history, world’s fairs, and the golden age of transatlantic passenger liners. These topics are reflected in many of the lectures he has taken around the state to libraries and historical societies. Professionally, Jason has worked in higher education since 2003. He began his career at Manchester Community College working with low income and first-generation college students. After 16 years at Manchester Community College Jason was named the Associate Dean of Student Affairs at Capital Community College. He is passionate about the mission of Capital Community College and enjoys his work there as much as he enjoys lecturing.