THE RAGE OF INNOCENCE: How America Criminalizes Black Youth with Kristin Henning 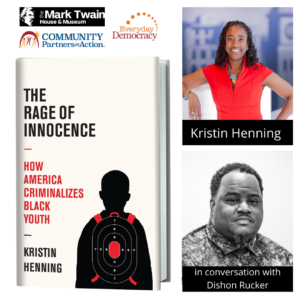 Henning explains how discriminatory and aggressive policing has socialized a generation of Black teenagers to fear, resent, and resist the police, and she details the long-term consequences of racism that they experience at the hands of the police and their vigilante surrogates. She makes clear that unlike White youth, who are afforded the freedom to test boundaries, experiment with sex and drugs, and figure out who they are and who they want to be, Black youth are seen as a threat to White America and are denied healthy adolescent development. She examines the criminalization of Black adolescent play and sexuality, and of Black fashion, hair, and music. She limns the effects of police presence in schools and the depth of police-induced trauma in Black adolescents.

Especially in the wake of the recent unprecedented, worldwide outrage at racial injustice and inequality, The Rage of Innocence is an essential book for our

Copies of The Rage of Innocence signed by the author are available for purchase through the Mark Twain Store; proceeds benefit The Mark Twain House & Museum. Books will be shipped after the event. We regret that we are NOT able to ship books outside the United States as it is cost-prohibitive to do so.

KRISTIN HENNING is a nationally recognized trainer and consultant on the intersection of race, adolescence, and policing. She is the Blume Professor of Law and director of the Juvenile Justice Clinic and Initiative at the Georgetown University Law Center. From 1998 to 2001 she was the lead attorney of the Juvenile Unit at the Public Defender Service for the District of Columbia. Awards she has received include the 2021 Leadership Prize from the Juvenile Law Center and the 2013 Robert E. Shepherd Jr. Award for Excellence in Juvenile Defense from the National Juvenile Defender Center.

DISHON RUCKER moved to Connecticut from Atlanta in 2005 to be closer to his home state of New Jersey. Prior to moving to Connecticut, his professional background and experiences always centered around sports. Dishon graduated from Hampton University with a BS in Sports Management. In 2005 he was introduced to the world of human services starting at Boys & Girls Village. Over the next 17 years, he has worked in various capacities serving children and adults that deal with behavioral, mental health, or substance abuse concerns. These experiences also pushed Dishon to start his own family services company called ROC Solid Family Services LLC (Rebuilding Our Communities), focused on addressing the needs of the total family, believing all lasting life lessons start at home. Through his experiences in the human services field, Dishon has not only learned the true value of service to others, but now he fully understands the impact that appropriate intervention can have on the lives of those in our communities. One of Dishon’s favorite quotes is from Muhammad Ali, “The rent you pay to be on this earth is service to others”. According to Dishon, “My goal is that my service to others will have a lasting impact and be a brick in the building of a solid foundation towards future success.” To learn more about Community Partners in Action, visit www.cpa-ct.org.