THE SCANDALOUS HAMILTONS: A GILDED AGE GRIFTER & A DISGRACED DESCENDENT OF A FOUNDING FATHER with Bill Shaffer (In-Person & Livestream) 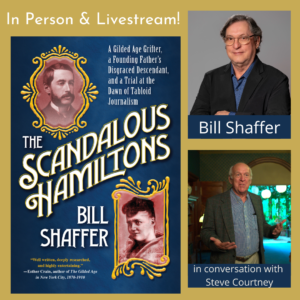 Mark Twain House favorite, journalist, and author Steve Courtney returns to interview Bill Shaffer, author of THE SCANDALOUS HAMILTONS: A Gilded Age Grifter, A Disgraced Descendent of a Founding Father, and a Trial at the Dawn of Tabloid Journalism.

An Alexander Hamilton heir, a beautiful female con artist, an abandoned baby, and the shocking courtroom drama that was splashed across front pages from coast to coast—this is the fascinating true story behind one of the greatest scandals of the Gilded Age . . .

It’s a story almost too tawdry to be true—a con woman prostitute who met the descendant of Alexander Hamilton in a brothel, duped him into marriage using an infant purchased from a baby farm, then went to prison for stabbing the couple’s baby nurse—all while in a common-law marriage with another man. The scandal surrounding Evangeline and Robert Ray Hamilton, though little known today, was one of the sensations of the Gilded Age, a sordid, gripping tale involving bigamy, bribery, sex, and violence.

When the salacious Hamilton story emerged during Eva’s trial for the August 1889 stabbing, it commanded unprecedented national and international newspaper coverage thanks to the telegraph and the recently founded Associated Press. For the New York dailies, eager to capture readers through provocative headlines, Ray and Eva were a godsend.

As lurid details emerged, the public’s fascination grew—how did a man of Hamilton’s stature become entangled with such an adventuress? Nellie Bly, the world-famous investigative reporter, finagled an exclusive interview with Eva after her conviction. Hamilton’s death under mysterious circumstances, a year after the stabbing added to the intrigue.

Through personal correspondence, court records, and sensational newspaper accounts, The Scandalous Hamiltons explores not only the full, riveting saga of ill-fated Ray and Eva, but the rise of tabloid journalism and celebrity in a story that is both a fascinating slice of pop culture history and a timeless tale of ambition, greed, and obsession.

In-Person Event: $5. Admission price will be deducted from your signed copy of the book with purchase. REGISTER HERE.

This event will also be live-streamed from the museum. Free; REGISTER HERE.

Copies of The Scandalous Hamiltons are available for purchase through the Mark Twain Store (in-person or online); proceeds benefit The Mark Twain House & Museum. Books will be shipped after the event. We regret that we are NOT able to ship books outside the United States as it is cost-prohibitive to do so.

Bill Shaffer holds an M.A., History of Design and Curatorial Studies from Parsons, The New School, New York. He is the author of Emotion in Motion: 55 Baranger Displays. Shaffer has been published on designobserver.com and the online site of Cooper Hewitt National Design Museum, where he was a Smithsonian Fellow. Shaffer has worked as a Research Assistant for Paul Goldberger on his book, Ballpark: Baseball in The American City, (Knopf, 2019) and for Laura Auricchio’s contribution to A True Friend of The Cause: Lafayette and the Antislavery Movement (Grolier Club, 2016).

Steve Courtney has a long-time and cherished association with The Mark Twain House & Museum where he has served in many capacities including roles in curatorial, interpretation, publicity, writing, editing, research, and programming. He is a former editor with The Hartford Courant and has written several books including Joseph Hopkins Twichell: The Life and Times of Mark Twain’s Closest Friend; The Loveliest Home There Ever Was: The Story of The Mark Twain House; “We Shall Have Them With Us Always:” The Ghosts of The Mark Twain House; and Mark Twain’s Hartford. Steve is co-editor of The Civil War Letters of Joseph Hopkins Twichell, A Chaplain’s Story.