THE SEEKER AND THE MONK: Sophfronia Scott in conversation with Barbara Brown Taylor 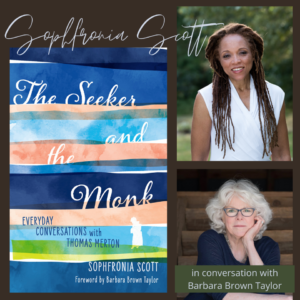 In The Seeker and the Monk: Everyday Conversations with Thomas Merton, Sophfronia Scott mines the extensive private journals of one of the most influential contemplative thinkers of the past, for guidance on how to live in these fraught times. As a Black woman who is not Catholic, Scott both learns from and pushes back against Merton, holding spirited, and intimate conversations on race, ambition, faith, activism, nature, prayer, friendship, and love. She asks: What is the connection between contemplation and action? Is there ever such a thing as a wrong answer to a spiritual question? How do we care about the brutality in the world while not becoming overwhelmed by it? By engaging in this lively discourse, readers will gain a steady sense of how to dwell more deeply within–and even to love–this despairing and radiant world.

Joining Scott in conversation is author and Episcopalian minister Barbara Brown Taylor.
FREE Program, although donations are gratefully accepted. REGISTER HERE.
Signed copies of The Seeker and the Monk are available for purchase through the Mark Twain Store; proceeds benefit The Mark Twain House & Museum. Books will be shipped after the event. We regret that we are NOT able to ship books outside the United States as it is cost-prohibitive to do so.

Sophfronia Scott grew up in Lorain, Ohio, a hometown she shares with author Toni Morrison. She holds a BA in English from Harvard and an MFA in writing from Vermont College of Fine Arts. She began her career as an award-winning magazine journalist for Time, where she co-authored the groundbreaking cover story “Twentysomething,” the first study identifying the demographic group known as Generation X, and People. When her first novel, All I Need to Get By, was published by St. Martin’s Press in 2004 Sophfronia was nominated for best new author at the African American Literary Awards and hailed by Professor Henry Louis Gates, Jr. as “potentially one of the best writers of her generation.” Her latest book is The Seeker and the Monk: Everyday Conversations with Thomas Merton. Sophfronia’s other books include Unforgivable Love, Love’s Long Line, Doing Business By the Book, and This Child of Faith: Raising a Spiritual Child in a Secular World, co-written with her son Tain. Her essays, short stories, and articles have appeared in numerous publications including Yankee Magazine, The Christian Century, North American Review, NewYorkTimes.com, and O, The Oprah Magazine. Her essays “The Legs On Which I Move” and “Why I Didn’t Go to the Firehouse” are listed among the Notables in the Best American Essays series. Sophfronia is the recipient of a 2020 Artist Fellowship Grant from the Connecticut Office of the Arts.  She has taught at Regis University’s Mile High MFA and Bay Path University’s MFA in Creative Nonfiction. She’s also delivered craft talks and held workshops at the Yale Writers’ Workshop, Meacham Writers’ Workshop, and the Hobart Festival of Women Writers. Currently Sophfronia is the founding director of Alma College’s MFA in Creative Writing, a low-residency graduate program based in Alma, Michigan. She lives in Sandy Hook, Connecticut where she continues to fight a losing battle against the weeds in her flower beds.

Barbara Brown Taylor is a best-selling author, teacher, and Episcopal priest.  Her first memoir, Leaving Church, won an Author of the Year award from the Georgia Writers Association in 2006.  Her next three books earned places on the New York Timesbestseller list.  Taylor has served on the faculties of Piedmont College, Emory University, Mercer University, Columbia Seminary, Oblate School of Theology, and the Certificate in Theological Studies program at Arrendale State Prison for Women in Alto, Georgia. Her latest book, Always a Guest, was released in October 2020 from Westminster John Knox Press.