THE SOUTHERNIZATION OF AMERICA with Frye Gaillard and Cynthia Tucker 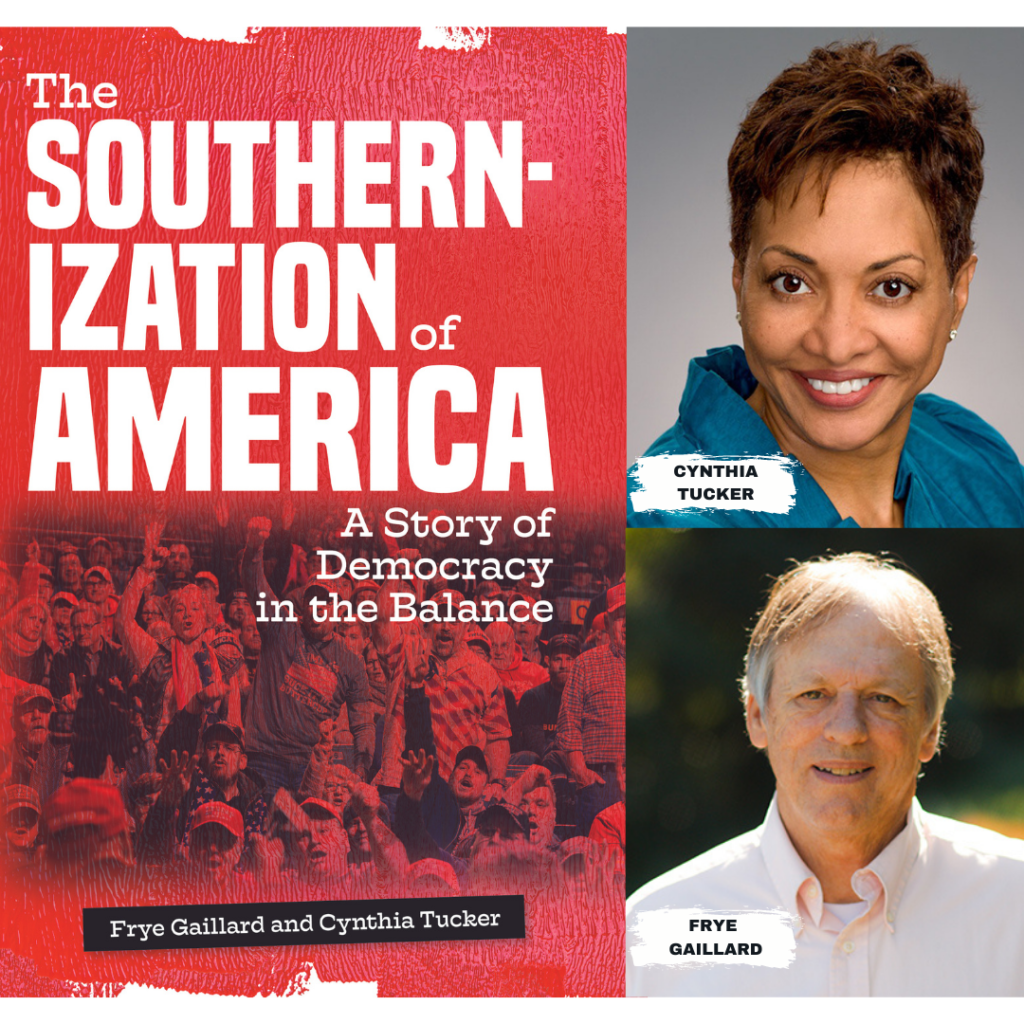 The Mark Twain House & Museum welcomes authors Frye Gaillard and Cynthia Tucker to discuss THE SOUTHERNIZATION OF AMERICA: A Story of Democracy In The Balance.

In 1974 John Egerton published his seminal work, The Americanization of Dixie. Pulitzer Prize-winner Cynthia Tucker and award-winning author Frye Gaillard carry Egerton’s thesis forward in THE SOUTHERNIZATION OF AMERICA, a compelling series of linked essays considering the role of the South in shaping America’s current political and cultural landscape. They dive deeper, examining the morphing of the Southern strategy of Richard Nixon and Ronald Reagan into the Republican Party of today, the racial backlash against President Obama, family separation on our southern border, the rise of the Christian right, the white supremacist riots in Charlottesville, the death of George Floyd, and the attack on our nation’s capitol. They find hope in the South too, a legacy rooted in the civil rights years that might ultimately lead the nation on the path to redemption. Tucker and Gaillard bring a multiracial perspective and years of political reporting to bear on a critical moment in American history, a time of racial reckoning and democracy under siege.

Copies of THE SOUTHERNIZATION OF AMERICA signed by the authors are available for purchase through the Mark Twain Store; proceeds benefit The Mark Twain House & Museum. Books will be shipped after the event. We regret that we are NOT able to ship books outside the United States as it is cost-prohibitive to do so.

FRYE GAILLARD is a writer in residence at the University of South Alabama, a former Southern Editor at the Charlotte Observer, and the author of more than 30 books, exploring themes of social justice and Southern music, religion, politics, and culture. His award-winning titles have ranged across the genres of history, memoir, journalism, and historical novels for young readers. Three of his books have been adapted as public television documentaries, and Gaillard has co-authored the script for two of those, including the Emmy-winning “In the Path of the Storms.”

His critically praised books have included A HARD RAIN: America in the 1960s, an NPR Great Read of 2018 and winner of the F. Scott Fitzgerald Literary Prize; CRADLE OF FREEDOM: Alabama and the Movement That Changed America, winner of the Lillian Smith Book Award; THE DREAM LONG DEFERRED: The Landmark Struggle for Desegregation in Charlotte, North Carolina, for which Gaillard received the NAACP Legal Defense Fund Humanitarian of the Year Award; and WATERMELON WINE: The Spirit of Country Music, featured in the Country Music Hall of Fame in Nashville.

CYNTHIA TUCKER, a veteran newspaper journalist and Pulitzer Prize winner, is a Visiting Professor of Journalism and Charlayne Hunter-Gault Distinguished Writer-in-Residence at the University of Georgia. She is also a highly-regarded commentator on TV and radio news shows.

Tucker was editorial page editor of The Atlanta Journal-Constitution newspaper for 17 years, where she led the development of opinion policy. More recently, she was that newspaper’s Washington-based political columnist. She maintains a syndicated column, which is published in dozens of newspapers around the country.

In 2007, Tucker won the Pulitzer Prize for commentary. She has also received numerous other awards, including Journalist of the Year from the National Association of Black Journalists.