THE TAKING OF JEMIMA BOONE: Matthew Pearl with Candice Millard 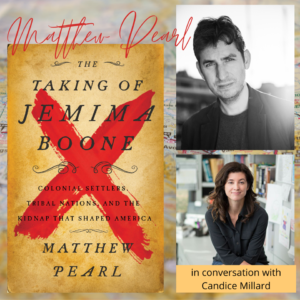 In his first work of narrative nonfiction, Matthew Pearl, bestselling author of acclaimed novel The Dante Club, explores the little-known true story of the kidnapping of legendary pioneer Daniel Boone’s daughter and the dramatic aftermath that rippled across the nation. Pearl will be adjoined with New York Times bestselling historian and author Candice Millard.

On a quiet midsummer day in 1776, weeks after the signing of the Declaration of Independence, thirteen-year-old Jemima Boone and her friends Betsy and Fanny Callaway disappear near the Kentucky settlement of Boonesboro, the echoes of their faraway screams lingering on the air.

A Cherokee-Shawnee raiding party has taken the girls as the latest salvo in the blood feud between American Indians and the colonial settlers who have decimated native lands and resources. Hanging Maw, the raiders’ leader, recognizes one of the captives as Jemima Boone, daughter of Kentucky’s most influential pioneers, and realizes she could be a valuable pawn in the battle to drive the colonists out of the contested Kentucky territory for good.

With Daniel Boone and his posse in pursuit, Hanging Maw devises a plan that could ultimately bring greater peace both to the tribes and the colonists. But after the girls find clever ways to create a trail of clues, the raiding party is ambushed by Boone and the rescuers in a battle with reverberations that nobody could predict. As Matthew Pearl reveals, the exciting story of Jemima Boone’s kidnapping vividly illuminates the early days of America’s westward expansion, and the violent and tragic clashes across cultural lines that ensue.

Signed copies of The Taking of Jemima Boone will be available for purchase through the Mark Twain Store; proceeds benefit The Mark Twain House & Museum. Books will be shipped after the event. We regret that we are NOT able to ship books outside the United States as it is cost-prohibitive to do so.

Matthew Pearl is a writer of fiction and nonfiction. Next up is a book of narrative nonfiction, The Taking of Jemima Boone, scheduled to be published in October 2021 from HarperCollins. He is the co-founder of the digital magazine Truly*Adventurous and his nonfiction writing has appeared in the New York Times, the Boston Globe, The Atavist Magazine, and Slate. His books have been international and New York Times bestsellers translated into more than 30 languages. The Globe and Mail declares him “a writer of rare talents,” Library Journal calls Matthew “the reigning king of popular literary historical thrillers,” and the New York Daily News raves “if the past is indeed a foreign country, Matthew Pearl has your passport.” Matthew has been chosen Best Author for Boston Magazine’s Best of Boston and received the Massachusetts Book Award for Fiction. The Strand Magazine, famous as the original publishers of the Sherlock Holmes stories, writes of Matthew’s influence: “It’s not every day that a novel comes along that has the power to reinvigorate and influence an entire genre, and become a timeless classic along the way. In the world of historical mysteries, only a handful of authors have managed to pull that off—Umberto Eco with The Name of The Rose, Matthew Pearl with The Dante Club, Erik Larson with The Devil in the White City, and …Caleb Carr [with The Alienist].” About the Moderator:

Candice Millard is the author of three New York Times bestsellers: The River of Doubt: Theodore Roosevelt’s Darkest Journey; Destiny of the Republic: A Tale of Madness, Medicine and the Murder of a President (James Garfield); and Hero of the Empire: The Boer War, A Daring Escape and the Making of Winston Churchill. She is the recipient of the 2017 BIO Award, the Edgar Award for Best Fact Crime, and the PEN Center USA Award for Research Nonfiction. Her most recent book, Hero of the Empire, was named Amazon’s number one history book of 2016. Millard’s work has also appeared in The New York Times Book Review, Washington Post Book World, The Guardian, National Geographic, and Time magazine. Her next book—on Sir Richard Burton, John Hanning Speke, and Sidi Mubarak Bombay’s search for the source of the Nile—will be released in 2022.