The Trouble Begins at 5:30: Daniel J. Mrozowski on Bret Harte and Mark Twain

A Born Bummer & A Brother Author: The Battered Friendship of Bret Harte and Mark Twain 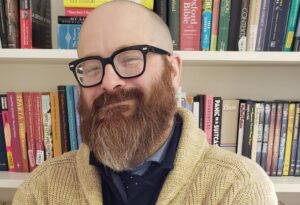 Friend. Collaborator. Rival. Enemy. The complicated relationship between Mark Twain and Bret Harte began in California, imploded in Hartford, and lasted both lifetimes. Daniel J. Mrozowski will explore the ways in which Bret Harte brought out the best and worst in Samuel Clemens, fueling his creativity and inspiring some of the most brutal invectives of one of the world’s most withering wits.

Daniel J. Mrozowski is the Director of Graduate Studies in English at Trinity College where he teaches courses in American literature, literary theory, and science fiction. He is working on a book about the fiction of the Gilded Age.

June 12, Stephen Kinzer, author, on his book The True Flag: Theodore Roosevelt, Mark Twain, and the Birth of the American Empire.