The Trouble Begins at 5:30: “Never Be in a Hurry to Believe – Did Joseph Twichell Save Huck Finn from Hell?” 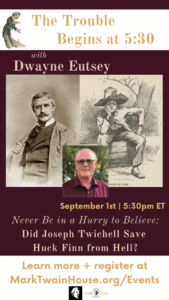 The Mark Twain House & Museum is excited to welcome Dwayne Eustey to our Trouble Begins series!  Join us on Wednesday, September 1st at 5:30pm to hear Dwayne’s lecture: “Never Be in a Hurry to Believe: Did Joseph Twichell Save Huck Finn from Hell?”

The lecture is derived from the book he is writing on Mark Twain and the liberal religious ethos of his times. The premise of his book is that nineteenth-century religious liberalism is an important yet largely overlooked influence on Twain’s life and body of work. It traces the creative impact of religious liberal movements on Twain throughout his life: from his youth in Hannibal (where he wanted to be a preacher of the gospel), through the peak years of his literary career, and even into the “dark writings” of his final decade.  Dwayne’s lecture focuses on two sermons Joseph Twichell preached in 1876 at Asylum Hill Congregational Church and the positive theological influence they had on Twain as he began to write Adventures of Huckleberry Finn.

Dwayne Eutsey graduated from Georgetown University in 1997 with a Master of Arts in Liberal Studies. Since then Eutsey has continued to research and develop his master’s thesis on Mark Twain’s complex religious views into a book (tentatively entitled “There is No Humor in Heaven”: Mark Twain and Liberal Religion).

Working full-time as a writer/editor in a non-academic career, Dwayne has established himself over the previous two decades as an independent scholar in Twain studies. In this time, he has received a Quarry Farm Fellowship from Elmira College’s Center for Mark Twain Studies, published several articles in peer-reviewed journals (such as the University of Notre Dame’s Religion & Literature), and presented numerous times on the topic of Twain and religion to both academic and lay audiences.

Dwayne also has a degree in English from the University of Maryland at College Park and currently lives on Maryland’s Eastern Shore with his wife Amy. He is the co-author of The Abide Guide, a popular fan book among aficionados of the Coen Brothers’ cult film classic, The Big Lebowski.

The Trouble Begins at 5:30 lecture series is made possible by support from The Center for Mark Twain Studies at Elmira College, Elmira, New York. https://marktwainstudies.com/