The Trouble Begins at 5:30 p.m.: “Waiting for Susy”by Bruce Michelson 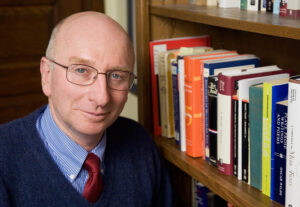 On Wednesday, September 11, at 5:30 p.m., in the first The Trouble Begins at 5:30 lecture of the Fall 2019 season at The Mark Twain House & Museum, Twain scholar Bruce Michelson will present his one-act, three-character play, Waiting for Susy.

Waiting for Susy is a one-act comedy about a momentous historic encounter that never took place. The setting is the great square in front of Rouen Cathedral in France; the time is October of 1894. Samuel Clemens and his daughter Susy, living with the rest of the family in the nearby seaside town of Étretat, have come to Rouen to shop for nightgowns and cigars.

Claude Monet is working on paintings nearby in the plaza.  What happens next is entirely made up, and you can safely believe every word of it.

A 5 p.m. reception will precede the performance. The event is free and Michelson will be available for discussion after the event. Pre-registration is strongly suggested. Reserve your ticket.