The Trouble Begins: Tom Raines: “Who Was George Griffin? 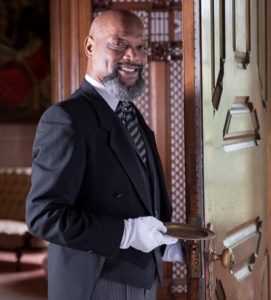 In an on-stage interview with Mark Twain House historian Steve Courtney, Tom Raines – who plays the Clemens family’s butler, George Griffin, in the museum’s Living History program – will talk about the man he portrays, his life, his role in the household, and his extraordinary outlook on his times. Griffin was born a slave, escaped to the Union lines during the Civil War, and found himself ultimately in Hartford. He joined the household as butler, the lead servant, and was also a major political and economic figure in the city’s black community. Twain considered him a good friend and wrote an appreciative memoir of him. Raines will also tell how he developed the Living History character; discuss the issues of portraying him, especially for African American visitors; and provide a look at Raines’s own dramatic career.

Tom Raines, who lives in Hartford, has been active in theater for more than 30 years. He has been involved with numerous Connecticut troupes, including the Theatre Guild of Simsbury, the Connecticut Cabaret Theatre in Berlin, and the Hole in the Wall Theater in New Britain. Outside his theater life, he was the first African American dispatcher in the Hartford Police Department, serving there for 20 years. He has taught at the University High School for Science and Engineering in Hartford, and was floor director and house manager at the Bushnell  Performing Arts  Center, also for 20 years.

A 5:00 p.m. reception will precede the performance. The event is free, but pre-registration is strongly suggested. Register here.