The Trouble Begins on PRINTER’S DEVIL with Bruce Michelson 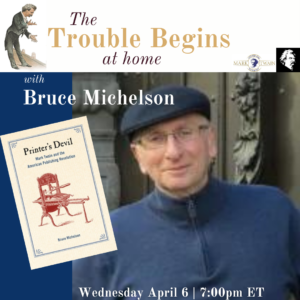 Join us on Wednesday, April 6 at 7:00PM ET for our next Trouble Begins, when author Bruce Michelson talks about Printing, Pictures, and the Mark Twain Legend.

With scores of illustrations he hand-picked or created for his books, big investments in breakthrough tech for printing and circulating pictures, and countless images of himself, no major American writer can match Sam Clemens’s lifelong involvement with pictures on paper. From his youth into his final days, we find Mark Twain’s face everywhere: daguerreotypes and photographs, lithographs and woodcuts, book-covers embossed and gilded, all with his likeness. Sam won international fame through his talents as an author, but he also won it with how he looked – and by the end of the nineteenth century, thanks to millions of printed images, people around the world knew his face, including multitudes who had never read a word of his prose. Trained as a printer himself, he understood the value of pictures, lots of them, for pleasing a new reading audience. Amid a boom in publishing innovation, he invested – and lost – thousands of dollars with a new technology for illustrations; and later he lost a lot more with his own publishing company, which went broke by taking on too much. This story of Mark Twain, starting from his boyhood in Hannibal print-shops and rolling through the picture-packed travel books, the always-illustrated novels, the lecture tours, Kaolatype, the Charles Webster Company, and decades of life in front of the cameras, is the first of many American fables of glory and heartache in a new visual age.

Buy your copy of the Printer’s Devil here.