The Trouble Begins with “Critical Insights: The Adventures of Tom Sawyer” (VIRTUAL) 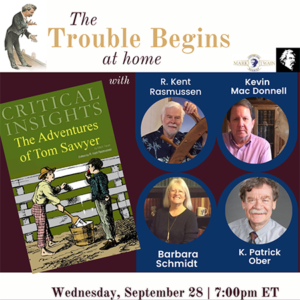 The Mark Twain House & Museum welcomes scholars R. Kent Rasmussen, Kevin Mac Donnell, Barbara Schmidt, and Patrick Ober to the Trouble Begins lecture series to discuss the recently published book “Critical Insights: The Adventures of Tom Sawyer.” The book was edited by Rasmussen and all four were among the twelve contributing scholars.

“Mark Twain’s The Adventures of Tom Sawyer holds a special place in American literature. Never out of print since its original publication in 1876 and equally beloved by both children and adults, it is one of the most widely read American novels ever published. Despite the book’s enduring popularity and its author’s fame as one of the greatest American writers, it has received surprisingly little scholarly attention. It is a difficult-to-believe but remarkable fact that Critical Insights: The Adventures of Tom Sawyer is the first entirely original collection of critical analyses of the novel ever published!”

The Trouble Begins lecture series is made possible by support from The Center for Mark Twain Studies at Elmira College, Elmira, New York and from Webster Bank.

Kent Rasmussen traces his love of Mark Twain back to the age of eight, when his family inherited the Collier edition of Mark Twain books from a grandfather. Books were rare in his home, so those twenty-five volumes became very special to him—particularly since he shared his bedroom with them while growing up. Despite his early conversion to literature, the doctorate he later earned at UCLA was in African history, not literature. Little more than thirty years ago, Kent decided to make a hobby of reading “everything” Mark Twain published and compiling a collection of quotes in a modest book., The Quotable Mark Twain (1997). Kent is also the author or editor of: Mark Twain A to Z (1995), Mark Twain for Kids (2004), Critical Companion to Mark Twain (2007), Bloom’s How to Write about Mark Twain (2008), Dear Mark Twain: Letters from His Readers (2013), and Mark Twain and Youth: Studies in His Life and Writings (2016, co-edited with Kevin Mac Donnell), plus two other Critical Insights volumes. Kent also assembled the first Penguin Classics edition of Mark Twain’s Autobiographical Writings (2012) and wrote introductions and notes for new Penguin editions of Tom Sawyer and Huckleberry Finn (both 2014). His other writings on Mark Twain include numerous articles in reference books, essay collections, and the Mark Twain Journal. In addition to his books on African history, he has also published books on African American history, Native Americans, and both world wars. Kent’s honors have included being profiled as a Legacy Scholar in the Mark Twain Journal in 2015 and receiving the Mark Twain Circle’s Thomas A. Tenney Service award in 2017. He recently joined the editorial board of the Mark Twain Journal and is presently finishing a broad study of screen adaptations of Mark Twain’s novels for the University of Missouri Press.

Kevin Mac Donnell encountered Tom Sawyer for the first time around the age of ten, when he was addicted to biographies of famous people. Thinking that book a biography, he pulled a copy off a library shelf and soon discovered it was something even better. His early fondness for books and libraries eventually led to his earning a master’s degree in library science at the University of Texas and building the world’s largest privately owned collection of Mark Twain first editions, photographs, manuscripts, and artifacts. He has also become a successful rare-book dealer and earned recognition as a master researcher. In 2013, for example, The Chronicle of Higher Education cited his discovery of the probable source of Mark Twain’s famous pen name as “research of note.” His essays on librarianship, antiquarian bookselling, and authors ranging from Mark Twain to Herman Melville have appeared in numerous journals and books, including The Mark Twain Encyclopedia (1993), and he has reviewed more than fifty titles for the Mark Twain Forum. He has also co-edited Mark Twain’s Rubaiyat (1983) with Alan Gribben and Mark Twain and Youth (2016) with R. Kent Rasmussen. He now serves on the editorial boards of both Firsts Magazine and the Mark Twain Journal, which honored him as a Mark Twain Legacy Scholar in 2016.

Patrick Ober is a medical doctor and professor of internal medicine at the Wake Forest School of Medicine in Winston-Salem, NC. Several times recognized as a “best doctor in America,” he has also been honored with the Association of American Medical Colleges’ distinguished teacher award. His interest in Mark Twain goes back to when he was ten and was given a copy of Huckleberry Finn—the first book he ever owned. That novel’s opening line made a deep impression: “You don’t know about me, without you have read a book by the name of The Adventures of Tom Sawyer . . . ” Inspired by Huck’s personal recommendation, Pat tracked down and read Tom Sawyer. Years later, in 2003, he combined his medical expertise with his lifelong love of Mark Twain to publish his highly acclaimed Mark Twain and Medicine: “Any Mummery Will Cure.” Since then, he has written numerous articles on aspects of Mark Twain’s medical history and related subjects for both professional medical journals and the Mark Twain Journal, as well as other books. Pat’s contributions to medical history and Mark Twain scholarship led to his being honored by the American Osler Society for modeling “Sir William Osler’s interests in the interface between the humanities and the sciences—in particular, medicine, literature, philosophy, and history.”

Barbara Schmidt recalls reading Tom Sawyer for the first time as a child, when she found a copy of the novel in a care package of used books sent to her by wealthy cousins. Now she is a much appreciated independent Mark Twain researcher who has become legendary for the wealth of useful material she makes available on the web and generously shares with other scholars and Mark Twain admirers. A resident of Kingsland, Texas, Barb holds a degree in criminal justice and psychology from Tarleton State University, where she also spent years as head of the instructional media center. Her job helped make her become an innovative Internet pioneer. In 1997, she launched one of the earliest Mark Twain websites, twainquotes.com, devoted to accurately documenting Mark Twain quotations and biographical information. Since then, she has used the site to publish her own original research, as well as groundbreaking research of other scholars. She is also the first biographer of illustrator True W. Williams, whom Mark Twain selected to illustrate the first edition of The Adventures of Tom Sawyer. Meanwhile, Barb has also long served as book review editor for the Internet discussion group Mark Twain Forum. In 2017, the Mark Twain Journal honored her as a Mark Twain Legacy Scholar.