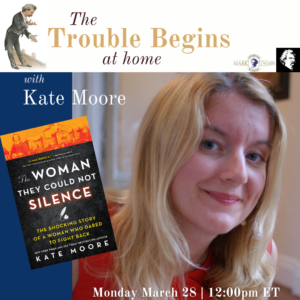 Join us for a special lunch-time Trouble Begins, when best-selling author Kate Moore talks about The Woman They Could Not Silence, an unputdownable story of a brilliant and courageous woman who unexpectedly changed the world.

This dark and dramatic but ultimately uplifting tale of a forgotten woman whose inspirational journey sparked lasting change for women’s rights and exposed injustices that still resonate today.

1860: As the clash between the states rolls slowly to a boil, Elizabeth Packard, housewife and mother of six, is facing her own battle. The enemy sits across the table and sleeps in the next room. Her husband of twenty-one years is plotting against her because he feels increasingly threatened – by Elizabeth’s intellect, independence, and unwillingness to stifle her own thoughts. So Theophilus makes a plan to put his wife back in her place. One summer morning, he has her committed to an insane asylum. The conditions inside the Illinois State Hospital are horrific. But most disturbing is that Elizabeth is not the only sane woman confined to the institution. There are many rational women on her ward who tell the same story: they’ve been committed not because they need medical treatment, but to keep them in line – conveniently labeled “crazy” so their voices are ignored. No one is willing to fight for their freedom. No one, that is, except Elizabeth…

Kate Moore is the New York Times and USA Today bestselling author of The Radium Girls, which won the 2017 Goodreads Choice Award for Best History, was voted U.S. librarians’ favorite nonfiction book of 2017, and was named a Notable Nonfiction Book of 2018 by the American Library Association. A British writer based in London, Kate writes across a variety of genres and has had multiple titles on the Sunday Times bestseller list. Her latest book is The Woman They Could Not Silence, which was the runner-up for Best History in the 2021 Goodreads Choice Awards and was also named a 2021 Booklist Editor’s Choice.

The Trouble Begins series is made possible with the support the Center for Mark Twain Studies in Elmira, New York.