The Trouble Begins with Kevin Mac Donnell: MARK TWAIN IN THE MARKETPLACE 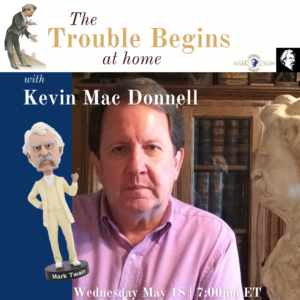 Join the Mark Twain House as we welcome back scholar and collector Kevin Mac Donnell to the Trouble Begins series. On Wednesday, May 18th at 7:00PM ET, Kevin will be discussing “Mark Twain in the Marketplace: The Use of Mark Twain’s Name and Image to Sell Everything.”

Using “piles of artifacts” from his personal collection Kevin will trace the use of Mark Twain’s name and image to sell vendible goods and services during his lifetime and after. Mark Twain’s “brand” can mean different things–a style of writing, a brand of humor, a celebrity endorsement, and most often the unauthorized use of his name or image for commercial gain. Mark Twain lived in two worlds–as a literary figure and as a celebrity. Kevin’s focus will be on his status as a celebrity and how this was exploited by both Twain and others, to promote an astonishingly broad range of products–including unsurprising things like whiskey, cigars, foods, clothing, pipes, and pens–and some more unusual things like mink stoles and a handsome stud horse.

Kevin Mac Donnell is a leading Mark Twain scholar and collector of books and memorabilia who lives in Austin, Texas. Mac Donnell co-edited (with Alan Gribben) Mark Twain’s Rubaiyat (1983), contributed articles to the Mark Twain Encyclopedia (1993), co-edited (with R. Kent Rasmussen) Mark Twain and Youth (2016), and has reviewed over 50 books for the Mark Twain Forum. His discovery of the probable source of Mark Twain’s nom de plume went viral on Salon.com and The Huffington Post, and was cited as “research of note” by The Chronicle of Higher Education. He was chosen as a Mark Twain Legacy Scholar by the Mark Twain Journal in 2016. His collection of more than 9,000 Mark Twain items–first editions, archives, manuscripts, and artifacts—is the largest in private hands, and is frequently shared with other scholars and museums.

The Trouble Begins series is made possible with the support the Center for Mark Twain Studies in Elmira, New York.