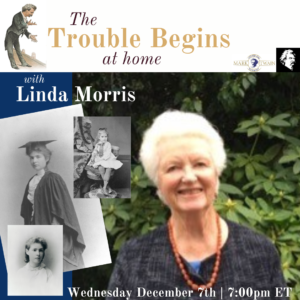 The Mark Twain House & Museum welcomes Twain scholars Linda Morris to the Trouble Begins lecture series to discuss her research into the life and death of Susy Clemens.

Susy Clemens, the oldest daughter of Sam and Olivia Clemens, died unexpectedly of spinal meningitis at the age of 24.  This presentation will focus on the final six years of Susy’s life, from the time she was admitted to Bryn Mawr College at the age of 18 to her final days in Hartford, Connecticut, where she stayed while preparing to rejoin her parents in Europe.  Much is known and has been written about her father’s celebration of Susy’s young life, but much less is known about her young adult years when Susy was for a time living apart from her parents and struggling with her own sense of self.

This presentation will examine her romantic relationship with fellow student Louise Brownell and the effects of their separation on Susy when the Clemens family moved to Europe to cut back on their living expenses.  It will explore the details about her life revealed in her many letters to Louise as well as letters to her sister Clara.  It will draw upon observations by early biographers about her life, upon select letters from Susy to her mother, Livy, and letters from Livy to intimate friends in which she described her own concerns for Susy’s health and well-being.  It will offer a much fuller sense of the young-adult Susy than the image of her that emerged as she was idealized posthumously.

The Trouble Begins lecture series is made possible by support from The Center for Mark Twain Studies at Elmira College, Elmira, New York and from Webster Bank.

Linda Morris is Distinguished Professor Emerita in the department of English,  University of California, Davis.  She has received The Charlie Award from the American Humor Studies Association and The Olivia Langdon Clemens Award from the Mark Twain Circle of America.  She has written extensively about nineteenth-century and twentieth-century American women’s humor as well as Mark Twain.  Her first book was a critical biography of Frances M. Whitcher (“The Widow Bedott”) entitled Women’s Humor in the Age of Gentility.  Her major work on Mark Twain is Gender Play in Mark Twain:  Cross-Dressing and Transgression.  She has published articles on Adventures of Huckleberry Finn, Pudd’nhead Wilson, and Personal Recollections of Joan of Arc.  Other articles include “Gender Bending as Child’s Play” in the works of Twain, and “Gender Issues:  Sexuality” for Mark Twain in Context.   She co-authored with Kate Morris “Camping Out With Miss Chief:  Kent Monkman’s Ironic Journey,” for a special issue of Studies in American Humor on Native American humor.  Her most recent publication is “Becky Thatcher and Aunt Polly in Three Dimensions” for Critical Insights:  The Adventures of Tom Sawyer.