The United States of Cryptids: A Tour of American Myths and Monsters by J.W. Ocker (VIRTUAL) 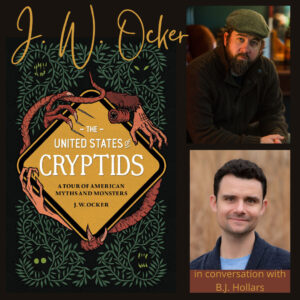 Welcome to the United States of Cryptids, where mysterious monsters lurk in the dark forests, deep lakes, and sticky swamps of all fifty states. From the infamous Jersey Devil to the obscure Snallygaster, travel writer and chronicler of the strange J. W. Ocker uncovers the bizarre stories of more than seventy of these creatures and investigates the ways in which communities embrace and celebrate their local cryptids. Readers will learn about:

Whether you believe in bigfoot or not, this fully illustrated compendium is a fun, frightening, fascinating tour through American folklore and history, exploring the stories we tell about monsters and what those stories say about us.

Copies of THE UNITED STATES OF CRYPTIDS are available for purchase through the Mark Twain Store; proceeds benefit The Mark Twain House & Museum. Books will be shipped after the event. We regret that we are NOT able to ship books outside the United States as it is cost-prohibitive to do so.

J.W. Ocker is the award-winning author of macabre travelogues, spooky kid’s books, and horror novels. His nonfiction books include The New England Grimpendium and The New York Grimpendium (both Lowell Thomas Award winners), Poe-Land: The Hallowed Haunts of Edgar Allan Poe (Edgar Award winner), A Season with the Witch: The Magic and Mayhem of Halloween in Salem, Massachusetts, and Cursed Objects: Strange But True Stories of the World’s Most Infamous Items. His novels include Death and Douglas and Twelve Nights at Rotter House. His next novel, The Smashed Man of Dread End, comes out from HarperCollins on August 17.

Ocker is also the creator of OTIS: Odd Things I’ve Seen (oddthingsiveseen.com), where he chronicles his visits to thousands of oddities of culture, art, nature, and history across the country and world with photos, articles, and through Odd Things I’ve Seen: The Podcast. His work has appeared on or in CNN.com, The Atlantic, Rue Morgue, the Boston Globe, The Guardian, TIME, and other places people stick writing. Ocker is from Maryland but has lived in New Hampshire for more than a decade. He has a wife, three daughters, and celebrates Halloween for two months.

Hollars is the recipient of the Truman Capote Prize for Literary Nonfiction, the Anne B. and James B. McMillan Prize, the Council of Wisconsin Writers’ Blei-Derleth Award, the Society of Midland Authors Award, and received a 2022 silver medal from the Midwest Book Awards.