THIS IS SHAKESPEARE with Oxford Professor Emma Smith 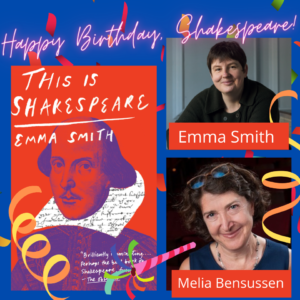 On April 23rd at noon, The Mark Twain House & Museum and Hartford Stage celebrate the 457th birthday of the Bard! Thanks to the miracle of technology, Oxford University Professor Emma Smith, author of This is Shakespeare, will join us from across the pond for a special lunchtime conversation with Hartford Stage Artistic Director Melia Bensussen.

In This Is Shakespeare, Emma Smith—an intellectually, theatrically, and ethically exciting writer—takes us into a world of politicking and copycatting, as we watch Shakespeare emulating the blockbusters of Christopher Marlowe and Thomas Kyd (the Spielberg and Tarantino of their day), flirting with and skirting around the cutthroat issues of succession politics, religious upheaval, and technological change. Smith writes in strikingly modern ways about individual agency, privacy, politics, celebrity, and sex. Instead of offering the answers, the Shakespeare she reveals poses awkward questions, always inviting the reader to ponder ambiguities.

“Entertaining and sagacious, this work will spur readers who gave up on Shakespeare on first pass to approach his oeuvre with new eyes.” – Publisher’s Weekly

This virtual program is free to attend, though donations are gratefully accepted. REGISTER HERE.

Copies of This is Shakespeare are available for purchase through the Mark Twain Store. Proceeds benefit The Mark Twain House & Museum. Books will ship after the event. We regret that we cannot ship outside of the U.S. at this time.

Emma Smith’s research focuses on the reception of Shakespeare in print, on stage, and in criticism. Her Shakespeare’s First Folio: Four Centuries of an Iconic Book (2016) combined aspects of the history of the book, histories of reading, and the interpretation of Shakespeare on the page to produce a biography of the book. Most recently, This Is Shakespeare (2019) makes a case for Shakespeare’s intrinsic ‘gappiness’, those spaces, ambiguities and unknowns that create opportunities for readers to engage, and demand that we complete the works for ourselves. She is currently working on editions of Nashe’s Summer’s Last Will and Testament and of Twelfth Night, and edits the journal Shakespeare Survey. Her collaborations with Laurie Maguire, including among a number of co-authored pieces a new theory about who wrote All’s Well that Ends Well, and the book Thirty Great Myths About Shakespeare, have developed into a new project about collaboration, historical, creative, and academic. In addition, pedagogy is important to her and she continues to work on readerly editions of early modern texts and on books, articles and lectures which disseminate research to the widest possible audience.