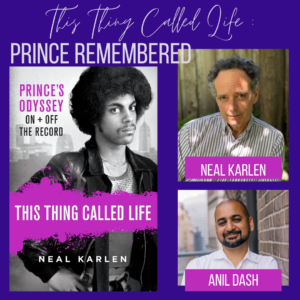 April 21, 2021 is not only the 111th anniversary of the death of Mark Twain, it is also the 5th anniversary of the passing of legendary musician Prince. To mark the occasion, The Mark Twain House & Museum presents Neal Karlen, the only journalist Prince granted in-depth press interviews to for over a dozen years, in conversation with tech CEO, blogger, and Prince enthusiast Anil Dash.

Neal Karlen’s relationship with Prince ranged from before Purple Rain to when the artist changed his name to an unpronounceable glyph. Karlen interviewed Prince for three Rolling Stone cover stories, wrote “3 Chains o’ Gold,” Prince’s “rock video opera,” as well as the star’s last testament, which may be buried with Prince’s will underneath Prince’s vast and private compound, Paisley Park. According to Prince’s former fiancée Susannah Melvoin, Karlen was “the only reporter who made Prince sound like what he really sounded like.” Karlen quit writing about Prince a quarter-century before the mega-star died, but he never quit Prince, and the two remained friends for the last thirty-one years of the superstar’s life.

Signed copies of Neal’s biography THIS THING CALLED LIFE: Prince’s Odyssey On and Off the Record can be purchased through The Mark Twain Store. Books will be shipped after the event. We regret that we cannot ship books outside of the U.S. at this time.

Neal Karlen is a former contributing editor for Rolling Stone, Newsweek staff writer, and regular contributor to The New York Times. He is the author of Babes in Toyland: The Making and Selling of a Rock and Roll Band, and other books ranging in content from minor league baseball to fundamentalist religion to linguistics. A graduate of Brown University, he lives in his hometown of Minneapolis.

Anil Dash is the CEO of Glitch and is recognized as one of the technology industry’s staunchest advocates for more humane, inclusive and ethical technology through his work as an entrepreneur, activist and writer. Dash was an advisor to the Obama White House’s Office of Digital Strategy, and today advises major startups and non-profits. Described by the New Yorker as a “blogging pioneer”, his Webby-recognized personal website has been cited in sources ranging from the New York Times to the BBC to TMZ, and in hundreds of academic papers. As a writer and artist, Dash has been a contributing editor and monthly columnist for Wired, co-invented the blockchain system for verifying digital artworks now known as NFTs, had his works exhibited in the New Museum of Contemporary Art, and collaborated with Hamilton creator Lin-Manuel Miranda on one of the most popular Spotify playlists of 2018.