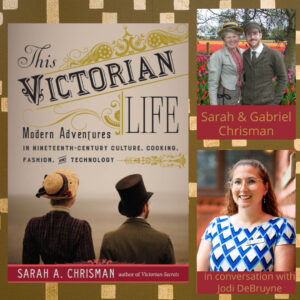 We all know that the best way to study a foreign language is to go to a country where it’s spoken, but can the same immersion method be applied to history?  How do interactions with antique objects influence perceptions of the modern world?

From Victorian beauty regimes to nineteenth-century bicycles, custard recipes to taxidermy experiments, oil lamps to an ice box, Sarah and Gabriel Chrisman decided to explore nineteenth-century culture and technologies from the inside out.  Even the deepest aspects of their lives became affected, and the more immersed they became in the late Victorian era, the more aware they grew of its legacies permeating the twenty-first century.

Most of us have dreamed of time travel, but what if that dream could come true?  Certain universal constants remain steady for all people regardless of time or place.  No matter who, when, or where we are, humans share similar passions and fears, joys and triumphs.  Part memoir, part micro-history, This Victorian Life is an exploration of the present through the lens of the past, and an analysis of how the warp and weft of these two times weave the fabric of the world in which we all live.

Copies of THIS VICTORIAN LIFE are available for purchase through the Mark Twain Store; proceeds benefit The Mark Twain House & Museum. Books will be shipped after the event. We regret that we are NOT able to ship books outside the United States as it is cost-prohibitive to do so.

Sarah A. Chrisman is the author of the internationally-acclaimed Tales of Chetzemoka historical fiction series, as well as a number of non-fiction books about the Victorian era.  Reviews of her work have appeared in The New York Times and the Edinburgh Book Review, and she has appeared as a guest on Whoopi Goldberg’s The View.

ABOUT OUR SPECIAL GUEST

Gabriel Chrisman, MLIS, is a trained archivist, librarian, Victorian expert, and captain of the Washington state chapter of the League of American Wheelmen.  He has over twenty years of experience in the bicycle industry and runs a small business making hand-built replicas of 1890’s safety bicycles (VictorianCycles.com).  Gabriel and his wife Sarah speak on Victorian topics at venues throughout the United States and have been interviewed by media groups on five continents for their expertise on Victorian culture and technology.