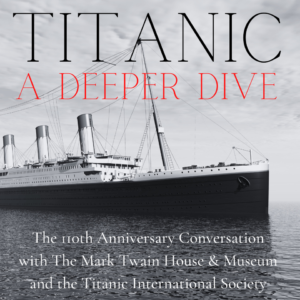 The Mark Twain House & Museum and the Titanic International Society invite you to be part of a fascinating author discussion on the 110th anniversary of the night the RMS Titanic struck an iceberg in the frigid North Atlantic.

On April 14, 1912, the “unsinkable” Titanic, in the midst of its maiden – and only – voyage, entered history as the most legendary maritime disaster. Immediately, the collision of ship and iceberg became international news. In the century since, the tragedy has grown in mythic proportions, inspiring books, films, television documentaries, a Broadway musical, museums, traveling exhibitions, and more. This panel of authors will illuminate why interest in the RMS Titanic has grown over time and some of the latest scholarship on this ongoing cultural obsession.

Titanic International Society is a non-profit historical organization based in New Jersey that was founded in 1989 to preserve and perpetuate the memory and history of the Royal Mail Ship Titanic, and those who sailed aboard her maiden and last voyage. Through the pages of their quarterly, fully-illustrated journal, Voyage, as well as through frequent membership activities, Titanic International Society disseminates the latest research about the Titanic and her legacy along with research and history of the great liners of the Past. With members invited to “get involved”, Titanic International Society is known as the history group that listens, and one which encourages robust discussion on the Titanic and her people.