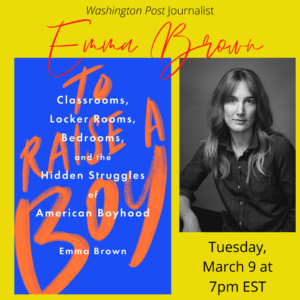 The #MeToo movement ignited a national dialogue around the everyday indignities and silent horrors many women and girls face. But what about the struggles that boys contend with? What is it really like to be a boy in America today? Fueled by the question “How will I raise my son to be better?” Washington Post reporter Emma Brown spent a year speaking to hundreds of people including coaches, educators, researchers, parents, and boys themselves.

The result is a stunning work of investigative journalism revealing that educators fail to meet the needs of young boys, parents are less likely to engage with their sons’ emotional lives than their daughters’, and, heartbreakingly, as many as one out of four boys experiences sexual assault. Brown joins MTH&M Director of Programs Jennifer LaRue for a conversation centering around parenting, American boyhood, and how we can transform both.

Signed copies of To Raise a Boy will be available for purchase through the Mark Twain Store; proceeds benefit The Mark Twain House & Museum.We regret that we are NOT able to ship books outside the United States as it is cost-prohibitive to do so.

Emma Brown is a reporter on The Washington Post’s investigative team. She previously worked as a wilderness ranger and as a middle school math teacher before discovering journalism during an internship at High Country News, a magazine that covers the American West. She worked as an intern at the Center for Investigative Reporting and The Boston Globe before joining The Washington Post in 2009.

Jennifer LaRue is director of public programs for The Mark Twain House & Museum and a former health reporter and columnist for The Washington Post.