When Samuel Clemens, more commonly known by his pen name “Mark Twain”, married Olivia Langdon on February 2, 1870, it was inevitable that Elmira, New York would become a cornerstone for their family life. The Langdon’s, Sam’s in-laws, were a prominent Elmira family. Sam, Livy, and their daughters would frequent the Langdon’s Elmira home, Quarry Farm, during the summer. Additionally, the Clemens family is buried in Elmira’s Woodlawn Cemetery, along with the Langdon family.

In 1982, Elmira College became home to the Center for Mark Twain Studies (CMTS) thanks to the Langdon family who gifted Quarry Farm to the college. The Center offers distinctive programs to foster and support Mark Twain scholarship and to strengthen the teaching of Mark Twain at all academic levels. The Center serves the Elmira College community and regional, national, and international students and scholars of Mark Twain.

Join us virtually on Thursday, August 20, at 5:30 p.m. for the next installment of The Mark Twain House’s Trouble at Home, when Dr. Matt Seybold and Dr. Joseph Lemak from CMTS will be interviewed by Betsy Maguire about all things Twain in Elmira.

This program is free to attend, though while registering for the event, we hope you’ll consider contributing what you’d call a fair ticket price. We thank you for your attendance whether you’re able to donate or not. REGISTER HERE.

Dr. Matt Seybold joined the Elmira College faculty in July 2015. He earned his Ph.D. from University of California, Irvine in 2012, after which he worked at The University of Alabama. He teaches courses on all periods of American Literature, as well as interdisciplinary courses on mass media and economics. Dr. Seybold’s scholarship focuses on the intersection of economics, mass media, and literary culture in the United States from the founding of the New York Stock Exchange in 1817 to the 2008 financial crisis. He has been a National Endowment for the Humanities Summer Scholar at the Center for the History of Political Economy at Duke University, a Taylor Fellow in American Literature at University of Virginia’s Harrison Institute, and a Fathman Young Scholar Award recipient. For a full list of publications, visit MattSeybold.com.

Dr. Joseph Lemak became Director of CMTS in January of 2016. He has served Elmira College in various roles for almost two 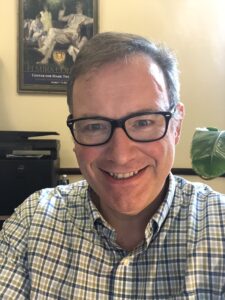 decades, most recently as Director of the Academic Writing Program and the Writing Center. Lemak holds a Ph.D. in Classics (with an emphasis in Roman History) from University at Buffalo and teaches a wide range of classes, including European History. As a lifelong resident of Elmira, Lemak is intimately familiar with the local legacy of Twain and his extended family. He has already succeeded in deepening ties between the Center, the College, and other historic institutions like the Park Church and the Chemung Valley Museum, where Joe previously served as editor of the Chemung Historical Journal. Dr. Lemak organizes the Trouble Begins lecture series, the Twain Symposia, the Quadrennial Conference, the Summer Institute for Teachers, and the Quarry Farm Fellowships.

Betsy Maguire is a freelance playwright, working with museums, historical societies and non-profit organizations. Betsy created and launched the Living History program at The Mark Twain House & Museum in Hartford. She has won Best Comedy and Best Drama festival awards, the “Connecticut Stories on Stage” contest, and was the 2019 recipient of the “Excellence in Playwriting Award,” given by the International Museum Theatre Alliance.

The Trouble Begins lectures are also supported by the Center for Mark Twain Studies in Elmira, New York.