Spiritualism took America by storm in the early 19th century, starting with a couple of sisters in upstate New York who caught the national imagination by way of strange rappings on tables and purported communication with spirits. In his early journalism, Mark Twain made vivid fun of the charlatans who preyed on those yearning for communication with lost relatives.

When he and his family moved to the sophisticated Nook Farm neighborhood, they found that interest in spiritualism seemed to go hand in hand with the progressive politics of the local intellectual community. When it came to the family’s own personal tragedies, however, Sam and Livy Clemens were not averse to trying out the practice.

Mallory Howard and Jason Scappaticci, two historians long associated with The Mark Twain House & Museum, will tell the story of Twain and spiritualism in conversation with Steve Courtney as the third installment of Trouble at Home, the virtual version of the museum’s beloved The Trouble Begins at 5:30 series. 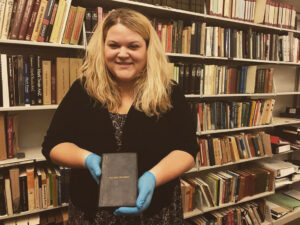 Mallory Howard, as Assistant Curator at The Mark Twain House & Museum, shares in the responsibility for the care, exhibition, and interpretation of the Mark Twain House and the museum’s collection of more than 20,000 artifacts and documents. She has aided countless researchers, done important work herself on Twainian subjects, and has spoken on aspects of Twain’s life and work in venues ranging from scholarly conferences to Mississippi riverboats. She earned her B.A.in American History at Central Connecticut State University and was inducted into the national history honor society Phi Alpha Theta. She holds a certification from the Modern Archives Institute in Washington, D.C. 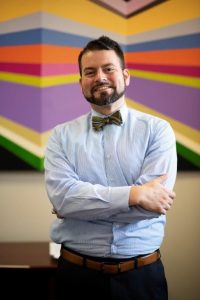 Jason Scappaticci, long associated with The Mark Twain House & Museum as a historical interpreter, is Associate Dean of Student Affairs at Capital Community College. He has a passion for history, and, he writes, “loves that he gets to go to work every day in the historic G. Fox building” in downtown Hartford. He has lectured on Twain and other historical subjects in libraries and community centers, the Mark Twain House and the Old State House. He earned his B.A. in History from Utica College and his M.A. from Trinity College in American Studies. He is currently serving in his third term on the Manchester Board of Education.