The story of Olivia Susan Clemens is an important one in Samuel Clemens’s — Mark Twain’s — life. “Susy,” the eldest of his and Livy Clemens’s daughters, early on showed talent for writing, drama, and music. “Like other children she was blithe and happy, full of play,” her father wrote, “unlike other the other average of children she was at times much given to retiring within herself and trying to search out the hidden meanings of deep things that make the puzzle and pathos of human existence.” Her death in her 20s was a deeply tragic moment for the family. 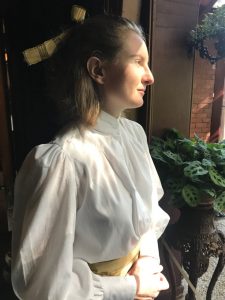 The Living History program at The Mark Twain House & Museum in Hartford, Connecticut features several historical interpreters who play the role of Susy in her teens — an earlier and happier time, when the family lived in the Hartford house. Among these is historian and actress Grace DiModugno.

Like all the house’s interpreters, DiModugno has been rigorously trained in Twainian matters, along with the skills particular to her role as Susy. On Thursday, May 28th, at 5:30 p.m. she will be the second interviewee in “Trouble at Home,” the online series that, for the moment, is taking on the role of the museum’s beloved 10-year-old series “The Trouble Begins at 5:30.” (The series title plays off Twain’s own lecture posters, which advertised “The Trouble Begins at Eight.”)

DiModugno graduated from the University of St. Joseph in West Hartford, Connecticut, in 2018. Her degree is in both English and History. She is currently employed at both The Mark Twain House & Museum and the Hartford Steam Boiler Inspection and Insurance Co. Of her Living History role, she says, “I find it a fantastic experience to combine both my love of history and my love of acting.”

She will be interviewed by Mark Twain House historian and founder of the “Trouble Begins” series Steve Courtney, and will regale us with Susy’s story, the adventures of being a Living History interpreter, and tales of the variety of visitors and their sometimes surprising reactions.

This event is free, but registration is required! Click here to register.