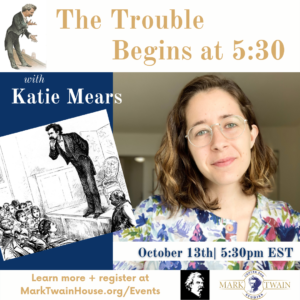 Katie Mears is back at the Mark Twain House, this time as a Trouble Begins guest. Join Katie and Jodi DeBruyne, the Mark Twain House Director of Collections, as they discuss Mark Twain’s role in the history of stand-up comedy. The Trouble will begin on Wednesday, October 13th at 5:30pm.

Scholarship on Twain’s life and his written works is plentiful, but his comedy performances are often underexplored. His humorous lectures captured audiences worldwide, and helped to pave the way for stand up comedy. Twain’s humor merged comedy and pathos, and contemporary reviewers often remarked on his ability to make his audiences laugh one minute and cry the next. In order to understand Twain’s humor and his contributions to American comedy performance, it’s important to look at innovations he made in terms of his delivery, his material, and his persona. Like the comedians of today, Twain spoke in casual, seemingly extemporaneous speech, often using comedy as a tool to discuss topics that are emotionally and/or politically charged or irreverent, and purposefully blurred the lines between his public brand and his personal life. When it comes to comedy history, Twain is slowly being brought into the conversation with books like Richard Zacks’ Chasing the Last Laugh, Eddie Tafoya’s Legacy of the Wisecrack and Wayne Federman’s History of Stand Up. We’ll be exploring the evolving view of Twain in comedy history, as well as the ways in which his multi-dimensionality, his wit, and his vitality made him a national icon.

Katie Mears is a comedy journalist and frequent contributor to Vulture.com. For nearly a decade, she has been fascinated by stand-up comedy and the comedians who perform it. Her work often covers modern stand-up, but she has a particular interest in proto-stand-up comedy and the various art forms and performers that predate stand-up in the United States. She wrote her Master’s thesis at New York University about Mark Twain’s Lecture Tours and the origins of American stand-up comedy, and in 2020, she co-wrote two chapters in the book The Dark Side of Stand Up Comedy. She has worked in comedy clubs, hosted a comedy radio show, produced video essays, and interviewed dozens of working comedians. Katie currently lives in Philadelphia.

The Trouble Begins at 5:30 lecture series is made possible by support from The Center for Mark Twain Studies at Elmira College, Elmira, New York.https://marktwainstudies.com/