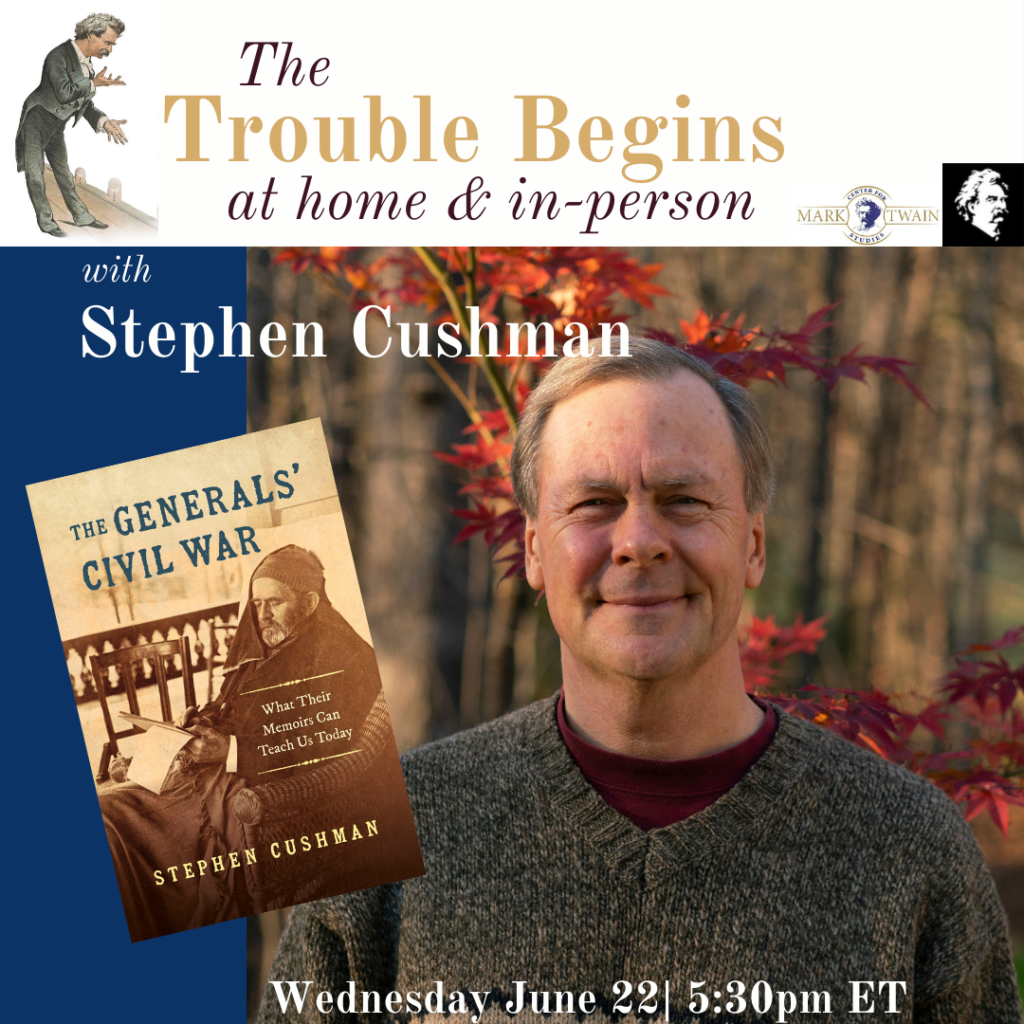 This is a FREE IN-PERSON EVENT.  REGISTER HERE for in-person admission.

In December 1885, under the watchful eye of Mark Twain, the publishing firm of Charles L. Webster and Company released the first volume of the Personal Memoirs of Ulysses S. Grant. With a second volume published in March 1886, Grant’s memoirs became a popular sensation. Seeking to capitalize on Grant’s success and interest in earlier reminiscences by Joseph E. Johnston, William T. Sherman, and Richard Taylor, other Civil War generals such as George B. McClellan and Philip H. Sheridan soon followed suit. Some hewed more closely to Grant’s model than others, and their points of similarity and divergence left readers increasingly fascinated with the history and meaning of the nation’s great conflict. The writings also dovetailed with a rising desire to see the full sweep of American history chronicled, as its citizens looked to the start of a new century. Professional historians engaged with the memoirs as an important foundation for this work.

In this insightful book, Stephen Cushman considers Civil War generals’ memoirs as both historical and literary works, revealing how they remain vital to understanding the interaction of memory, imagination, and the writing of American history. Cushman shows how market forces shaped the production of the memoirs and, therefore, memories of the war itself; how audiences have engaged with the works to create ideas of history that fit with time and circumstance; and what these texts tell us about current conflicts over the history and meanings of the Civil War.

This event will also be live-streamed from the museum. REGISTER HERE to access the live stream.

Stephen Cushman is Robert C. Taylor Professor of English at the University of Virginia, where he has taught for forty years. He is the author of The Generals’ Civil War: What Their Memoirs Can Teach Us Today (University of North Carolina Press, 2021),Belligerent Muse: Five Northern Writers and How They Shaped Our Understanding of the Civil War (University of North Carolina Press, 2014), and Bloody Promenade: Reflections on a Civil War Battle(University Press of Virginia, 1999). Author of seven volumes of verse and two critical studies of American poetry, he served as general editor of the fourth edition of the Princeton Encyclopedia of Poetry and Poetics (2012). Cushman has been a fellow of the American Council of Learned Societies and a Fulbright Teaching Fellow in Greece. In 2014 he was named UVA Cavalier Distinguished Professor, and in 2015 he won a State Council of Higher Education for Virginia Outstanding Faculty Award. During 2019-20 he was Rogers Distinguished Fellow in Nineteenth-Century American History at the Huntington Library, San Marino, California.