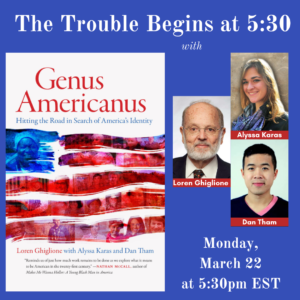 For the first Trouble Begins at 5:30 lecture of the spring 2021 season, The Mark Twain House & Museum is thrilled host Loren Ghiglione, Alyssa Karas, and Dan Tham as they talk about their book Genus Americanus: Hitting the Road in Search of America’s Identity and their journey to follow in Mark Twain’s footsteps across the United States.

On their journey they retraced Mark Twain’s travels across America—from Hannibal, Missouri, to Chicago, New York, Boston, Philadelphia, Washington, DC, New Orleans, Salt Lake City, San Francisco, and Seattle. They hoped Twain’s insights into the late nineteenth-century soul of America would help them understand the America of today and the ways that our cultural fabric has shifted. Their interviews focused on issues of race, religion, gender, sexual orientation, and immigration status.

Copies of Genus Americanus: Hitting the Road in Search of America’s Identity will be available for purchase through The Mark Twain Store. Proceeds benefit The Mark Twain House & Museum. We regret that we are NOT able to ship books outside the United States as it is cost-prohibitive to do so.

LOREN GHIGLIONE is a veteran of a half century in journalism and journalism education and professor emeritus of journalism at Northwestern University. He owned and edited the Southbridge Evening News and ran its parent company, Worcester County Newspapers, for twenty-six years. He also served as a four-time Pulitzer Prize juror, guest curator of a 1990 Library of Congress exhibit and president of the American Society of Newspaper Editors. The author or editor of nine books, he is a fellow of the American Academy of Arts and Sciences.

DAN THAM has served as production assistant, associate producer, and producer at CNN.

The Trouble Begins lecture series is presented in part with support from The Center for Mark Twain Studies at Elmira College, Elmira, New York. www.marktwainstudies.org