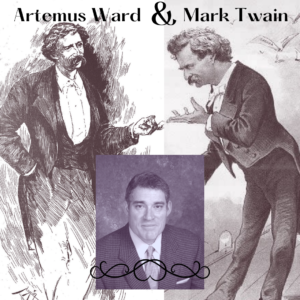 John Pascal is returning to The Mark Twain House & Museum’s Trouble Begins series! Join us on November 10th at 5:30pm to hear John tell us all about Artemus Ward, the gentle humorist, and Ward’s lecture influence on Mark Twain.

The American humorist Artemus Ward (1834-1867), like Mark Twain, used a pen name—his real name was Charles Ferrar Browne. A favorite of President Lincoln’s Ward was America’s preeminent literary comedian just before Twain gained fame. Ward’s humor and audience rapport at his many lecture made him a brilliant success. Ward, who reveled in outlandish spellings, was regarded by Twain’s editor and friend William Dean Howells as “the humorist who first gave the world a taste of the humor that characterizes the whole American people.”

Ward’s skill in telling wild tales from the lecture platform enthralled thousands throughout the United States, Canada, and England, where he used what one writer has called “mock gravity, the look of innocent surprise when the audience laughed . . . anticlimaxes, pauses, non sequiturs, and wanderings of thought.” His techniques were copied directly and used by Twain, whose 1895 essay “How to Tell a Story” gives evidence of the influence of Ward’s lecture methods.

John Pascal worked in the corporate world for eighteen years before pursuing the vocation of teaching. He is now in his twentieth year as Seton Hall Preparatory School in West Orange, N.J., where he teaches 9th and 11th Grade Honors English. He has also created a year-long Honors elective that does not exist in most if not all high school and college curriculums in our country: The Writings of Mark Twain, an appreciation of the relevance of Twain’s life and writings to our students. In its sixth year, this course is now recognized as academically rigorous enough to receive three college credits in English through Seton Hall University’s Project Acceleration.

His Master’s thesis, Artemus Ward: The Gentle Humorist was selected by VDM Publishing House Ltd. for book publication in 2009. He is a contributing author to Mark Twain and Youth published in 2016 by Bloomsbury Academic. He has also contributed to The Mark Twain Journal and The Mark Twain Forum. Since 2009, he has presented papers at the State of Mark Twain Studies Conferences at Elmira College and the Clemens Conferences at the Mark Twain Boyhood Home & Museum in Hannibal, Missouri. Mr. Pascal is the Moderator of Seton Hall Prep’s Future Lawyers Club, Future Business Leaders of America, Future Medical Leaders Club, Museums Club, the Boy Scouts’ Eagles Club, and Director of the Prep’s Elementary Schools Tutoring Program. For the school year of 2009-10, he was awarded Seton Hall Prep’s Salvatore N. Caprio Award that is given to “A Teacher, a Moderator, and a Counselor who is Generous in Time, Patience, and Concern.” He has also been honored for his contributions to Holocaust studies.

For more information about the program, call 860-247-0998 or visit marktwainhouse.org/