As one of America’s favorite authors, Mark Twain’s words are familiar to us through his books, letters, and quotes. However, in his day, Twain was also a popular lecturer, speaking to audiences all over the United States and all over the world. This leads us to ask, what did his voice sound like? Kevin Mac Donnell, a leading Mark Twain scholar and collector of books and memorabilia who lives in Austin, Texas, will be answering just that question during the Mark Twain House’s second Trouble Begins at 5:30 lecture of the Fall 2020 season.

In his talk, The Voice of Mark Twain, 1863-2019, Mac Donnell separates the facts and rumors surrounding the six times that Mark Twain’s voice was recorded, reviews the imitators and impersonators who were active during his lifetime (and Twain’s opinion of one of them) and connects one of them directly to Hal Holbrook’s incomparable impersonation of Mark Twain. New evidence is presented that answers the question of whether Twain’s famous drawl was genuine or part of his stage persona, and new documentary evidence is also presented that establishes exactly how slowly (words per minute) he spoke. This talk concludes with why Mark Twain’s physical voice is essential to an understanding of his writings in a way that does not apply to any other American author. 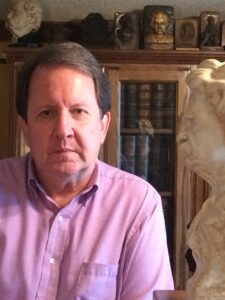 Kevin Mac Donnell is a leading Mark Twain scholar and collector of books and memorabilia who lives in Austin, Texas. Mac Donnell co-edited (with Alan Gribben) Mark Twain’s Rubaiyat (1983), contributed articles to the Mark Twain Encyclopedia (1993), co-edited (with R. Kent Rasmussen) Mark Twain and Youth (2016), and has reviewed over 50 books for the Mark Twain Forum. His discovery of the probable source of Mark Twain’s nom de plume went viral on Salon.com and The Huffington Post, and was cited as “research of note” by The Chronicle of Higher Education. He was chosen as a Mark Twain Legacy Scholar by the Mark Twain Journal in 2016. His collection of more than 9,000 Mark Twain items–first editions, archives, manuscripts, and artifacts—is the largest in private hands, and is frequently shared with other scholars and museums.