For 42 years the Hartford minister Joseph Twichell served as Mark Twain’s confidant, friend, fellow joker, sharer of long walks, partner in vigorous conversations and source of literary inspiration. Their lively letters to each other are full of chat and squabbles and quips – along with deep affection and consolation in times of tragedy. And here and there they are a little risqué.

November 15 marks the publication of the paperback edition of these letters — the more than 300 surviving examples — co-edited by Steve Courtney of The Mark Twain House & Museum along with scholars Peter Messent and Harold K. Bush.

Hardcover and paperback versions of the book are available through the Mark Twain Shop. We regret that we are NOT able to ship books outside the United States at this time. Click here to shop. 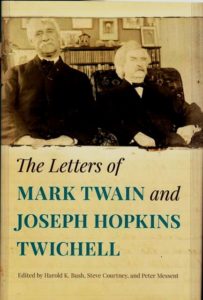 Steve will be interviewed by Mark Twain House Assistant Curator Mallory Howard in the Museum’s prestigious series “The Trouble Begins at 5:30” on Wednesday, December 9 — at 5:30, of course. This is a FREE event hosted virtually on Crowdcast. Donations encouraged. REGISTER HERE.

The Letters of Mark Twain and Joseph Hopkins Twichell (University of Georgia Press) got a blurb from Hal Holbrook, the actor and legendary performer of the one-man show Mark Twain Tonight: “Two friends talking. You get more of Mark Twain the unguarded person from these conversations between two friends than from the biographies. They traveled the footpaths of Europe together, their wives and children enriched their friendship, they could say what they wanted and know they’d get away with it. This is special.”

The idea that Twain’s best friend was a preacher is a surprising one, and the letters show that they battled on many fronts, both political and theological. “Oh, the human race!—what a ridiculous invention it is,” Twain wrote to Twichell. The minister wrote back: “Mark, the way you throw your rotten eggs at the human race doth greatly arride me.” 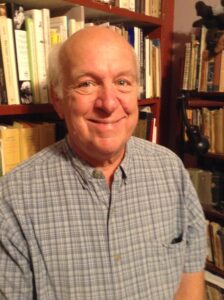 Steve Courtney has been a journalist for 40 years, largely at The Hartford Courant, and won the 2009 Connecticut Book Award for Joseph Hopkins Twichell: The Life and Times of Mark Twain’s Closest Friend (University of Georgia Press). He is also the author of ‘The Loveliest Home That Ever Was’: The Story of the Mark Twain House in Hartford (Dover Publications); and ‘We Shall Have Them With Us Always’: The Ghosts of the Mark Twain House (Paige Compositor Press). He co-edited, with Peter Messent, The Civil War Letters of Joseph Hopkins Twichell: A Chaplain’s Story (University of Georgia Press). He has been both publicist and Curatorial Special Projects Coordinator at The Mark Twain House & Museum, where he founded the museum’s Writing Program and Twainian lecture series, The Trouble Begins at 5:30, which celebrates its tenth anniversary this year.