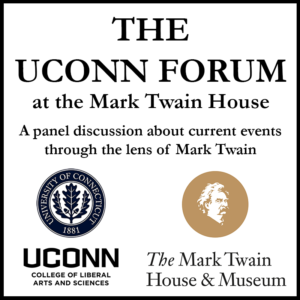 The theme of the November panel will be political corruption, as framed through an excerpt from The Gilded Age: A Tale of Today.  The Gilded Age was Twain’s first novel, which he co-authored with his Hartford neighbor Charles Dudley Warner.  Published in 1873, the book uses satire to criticize the greed and political corruption of the era, which subsequently became known as “the Gilded Age.”  It is the perfect lead-in to a discussion of the enduring issue of corruption and of the role that money has played, and continues to play, in society and the political system.

All of the panelists are from the University of Connecticut. They are:

Michael E. Wallace, Professor of Sociology. Wallace researches social stratification and inequality, the sociology of work and organizations, and the social organization of capitalism in the U.S. and other affluent democratic countries.

Maureen Croteau, head of the Department of Journalism.  Croteau was named New England Journalism Educator of the Year by the New England Newspaper & Press Association in 2014, and is a member of the Connecticut Journalism Hall of Fame.