The Mark Twain House & Museum is so excited…and we just can’t hide it! 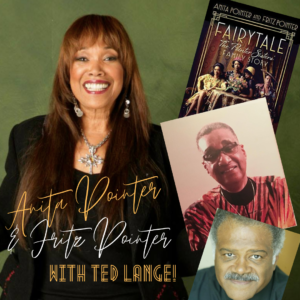 We are thrilled to welcome Anita Pointer, a founding member of the multiplatinun singing group The Pointer Sisters. Joined by her brother Professor Fritz Pointer and beloved actor, writer and director Ted Lange (star of “The Love Boat”), Anita will be discussing her new memoir, her career, her legendary family, and her commitment to Black activism.

Tickets for this virtual conversation are $20 and can be purchased by CLICKING HERE. Autographed copies of Fairytale – The Pointer Sisters’ Family Story will be on sale during the event.

Fairytale is the first and only book to provide inside portraits of The Pointer Sisters‘ formative and professional life–June, Bonnie, Anita and Ruth come of age as “mold-breaking” artists during the Civil Rights and Black Power movements of the 1960s. See how paths chosen and challenges faced–individually and collectively–strengthened and honed their forty-eight year musical career. This is a story of love and rivalry between sisters–for lead vocals, and for men. It is also an intimate story of family love–of a sagacious, strong and caring father, and a mother’s love. In Fairytale, Anita takes us inside the relationship of the sisters, world-renowned entertainers whose singing, writing, and recording effortlessly crossed genres–Jazz (scat, bebop), Blues, Rock and Roll, Pop, Dance, Country & Western, Rhythm & Blues. Signed copies of Fairytale will be available for purchase through The Mark Twain Museum Store.

Anita Pointer and her sisters found fame in 1973 when the Anita-led “Yes We Can Can” reached No. 11 on the Billboard Hot 100. In 1974, her writing talents helped the group make music history when “Fairytale” became a hit on the country music charts and enable The Pointer Sisters to become the first black female group to perform at the Grand Ole Opry. “Fairytale” won the group its first Grammy Award for Best Country Performance by a Duo or Group, and a Grammy nomination for the Best Country Song of 1975. In the late 1970s and early 1980s, The Pointer Sisters rose to higher levels of success with “Fire” (1978), “He’s So Shy” (1980), “Slow Hand” (1981), and “I’m So Excited” (1982). In 1983, the trio’s Break Out album reached multi-platinum status and won the group two more Grammy Awards. In 1986, Anita found chart success with country superstar Earl Thomas Conley on the song “Too Many Times,” which reached no. 2 on the country chart. In 1987, she released her first solo album, Love for What It Is. Her album’s first single “Overnight Success” reached no. 41 on the Billboard R&B chart while its second single, “More Than a Memory” reached #73 in 1988. In 1994, Anita and her sisters receive a star on the Hollywood Walk of Fame. In 1998, Anita was singularly inducted into the Arkansas Black Hall of Fame.

Fritz Pointer, one of the older brothers of June, Bonnie, Anita and Ruth, brings insight, veracity and passion to this story. No one else knows the family, community, political or social history out of which The Pointer Sisters came as thoroughly and deeply as he does. Fritz has a BA in English, Creighton University, 1966; MA, African Studies, UCLA, 1971; MA, African Languages and Literature, U. Wisconsin, Madison, 1979. He has thirty years experience teaching Composition, African and African American Humanities, and History in higher education. Fritz has authored two books and several scholarly articles in his area of African Literature.

Ted Lange exemplifies the Renaissance Man Theatre Award that he received from the NAACP in Los Angeles and the Heroes and Legends HAL Lifetime Achievement Award.  A prolific author, educator, and director and actor of stage and screen, on May 10, 2018, Lange received a star on the Hollywood Walk of Fame in recognition of his Contribution to the History of Television for his work on The Love Boat. A graduate of London’s Royal Academy of Dramatic Arts, Lange has written twenty-five plays and has been labeled The Black Neil Simon, The Brown Bard, and The Footnote Historian.  His quest is to weave the African American experience into stories that entertain and educate by using current events as the touchstone for timely stories and characters, by discovering little known historical facts and bringing alive lost moments of black history, and by using the timelessness of Shakespearean tales to reflect what is still relevant in today’s culture.

Mark My Words author events are sponsored by the Wish You Well Foundation.