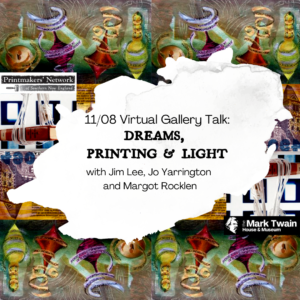 Jim Lee will speak about his artistic response to two Mark Twain quotes from THE MYSTERIOUS STRANGER manuscripts, 1902-08, unpublished in Twain’s lifetime. One is a rather dark interpretation of the meaning of life. The other is more hopeful and involves the process of letterpress printing. Images shown in the lecture will trace the development of the two printed broadsides based on the quotes, printed with letterpress type and color woodcut. He will touch on Twain’s involvement with the Paige Compositor, an early attempt at automated typesetting. Jim Lee will also show examples of his other print work.

Margot will discuss her visual response to Mark Twain’s article celebrating the opening in 1900, of the Gutenberg Museum in Mainz, Germany. In the article, he expresses both positive and negative opinions about the effects the printing press and moveable type have had on global communication. Margot will also describe her printmaking methods for the three prints that will be on display. She will show several incised wood blocks and examples of other prints where she responds to both historical and current issues.

Jo Yarrington will explain her artistic response to THE ADVENTURES OF HUCKLEBERRY FINN, what Twain calls a “mental kaleidoscope”  and the marking of time, through the cyanotype and photogram image rendering processes that record in real-time the sun and the journey of the earth in its spinning, which best encapsulates the imprint of Twain’s work and its thingness in Yarrington’s words.

Jim Lee was born in the Midwest. He taught printmaking, drawing, and book arts at the Hartford Art School/University of Hartford, West Hartford, CT from 1982 to 2020. Landscape is at the core of his work. He often begins a series with on-site drawings and watercolors, and from these develops his color reduction woodcut prints. Recent work has been based on the west coast of Ireland, Maine, and Maritime Canada. He also produces limited edition letterpress books that contain his images. Collections including his work: The Metropolitan Museum of Art, The National Portrait Gallery, The Getty Art Center, The Wadsworth Athenaeum, The Art Institute of Chicago, The Museum of Fine Arts-Boston, The Guangdong Museum of Fine Arts-Chongqing, China, The New York Public Library, University of San Francisco, and The Ballinglen Art Museum, Ballycastle, Co. Mayo, Ireland.

Margot Rocklen lives in Connecticut. She holds a BFA in Graphic Design from Carnegie Mellon University and an MS in Art Education from Southern Connecticut State University. She studied printmaking at CMU and Tyler School of Art in Rome, Italy. Margot has worked as a graphic designer and illustrator. She has been on the arts faculty of Gateway Community College in New Haven and taught at Paier College of Art and the Cooperative Arts and Humanities Magnet High School.

A founding member of the Printmakers’ Network of Southern New England, Margot has coordinated many of their programs and workshops. Recently she traveled to China with four PNSNE members to exhibit prints at the Art Museum of the Guangzhou Academy of Fine Arts and conduct workshops for students at the Academy.

Margot works in several forms of printmaking including Japanese woodblock, monotype, and intaglio. She also creates sculptural composites in vitreous enamel on metal. Her art tends to be narrative, with a touch of irony. She combines elements from sketches and photographs, developing a design and palette that communicate a message. Her subject matter may be a current or historical issue, the significance of a word or object, or the tenuous relationship between humanity and nature. It is important to her that viewers sense the inspiration for its work and consider its significance.

Margot has exhibited her prints and enamels primarily in the eastern U.S. Her work is held in private collections, museums and university collections in the U.S. and Japan.

Jo Yarrington is an artist, educator, and curator. She has been in over 350 solo and group exhibitions in the United States, Germany, Italy, Scotland, Mexico, Iceland, Greece, Korea, and China. She has been a recipient of grants and fellowships from the Pollock Krasner Foundation, the New York Foundation for the Arts, the MacDowell Colony, SIMS Residency/ Iceland, Cill Rialaig Artists Residency/Ireland, the Museum of Glass Artist Residency, Ucross Artist Residency, the Virginia Center for Creative Arts, the Museum of American Glass Artist Residency and the American Scandinavian Foundation, among others. She represented the United States at the Sharjah Biennial, United Arab Emirates, and was a participant in the Berlin Biennial. in 2010 she won the Bronze Prize at the Museum of Contemporary Art in Skopje, Macedonia. Jo Yarrington.  She studied at Ohio State University where she received her BAE, BFA, and MFA. She currently lives and works in New York City and teaches in the Department of Visual and Performing Arts at Fairfield University.