WAITING FOR AN ECHO: The Madness of American Incarceration 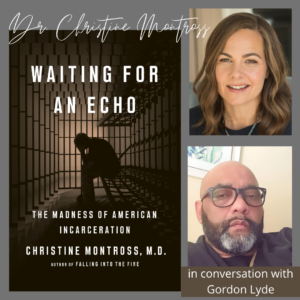 The Mark Twain House & Museum and Community Partners in Action present WAITING FOR AN ECHO: The Madness of American IncarcerationBrown University Professor and practicing psychiatrist Dr. Christine Montross discusses her groundbreaking new book, Waiting for an Echo: The Madness of American Incarceration, with Gordon Lyde, Peer to Peer Case Manager for Community Partners in Action’s Reentry Treatment Program.Dr. Montross has spent her career treating the most severely ill psychiatric patients. Several years ago, she set out to investigate why so many of her patients got caught up in the legal system when discharged from her care–and what happened to them therein. Waiting for an Echo is a riveting, rarely seen glimpse into American incarceration. It is also a damning account of policies that have criminalized mental illness, shifting large numbers of people who belong in therapeutic settings into punitive ones.The stark world of American prisons is shocking for all who enter it. But Dr. Montross’s expertise–the mind in crisis–allowed her to reckon with the human stories behind the bars. A father attempting to weigh the impossible calculus of a plea bargain. A bright young woman whose life is derailed by addiction. Boys in a juvenile detention facility who, desperate for human connection, invent a way to communicate with one another from cell to cell. Overextended doctors and correctional officers who strive to provide care and security in environments riddled with danger. In these encounters, Montross finds that while our system of correction routinely makes people with mental illness worse, just as routinely it renders mentally stable people psychiatrically unwell. The system is quite literally maddening.FREE virtual program with donations gratefully accepted and split equally between The Mark Twain House & Museum and Community Partners in Action. REGISTER HERE.Signed copies of Waiting for an Echo will be available for purchase through the Mark Twain Store; proceeds benefit The Mark Twain House & Museum. Books will be shipped after the event. We regret that we are NOT able to ship books outside the United States as it is cost-prohibitive to do so.——————Community Partners in Action was founded in 1875 as the Prisoners’ Friends’ Society with Mark Twain as one of their founding benefactors. Community Partners in Action focuses on behavioral change and advocates for criminal justice reform. CPA’s employment, basic needs, reentry and recovery services work together to reduce recidivism, enhance public safety and inform policy – all at a fraction of the cost of prison. In partnership with the State of Connecticut, US government, private funders, organizations and businesses, Community Partners in Action works to make a positive impact in the lives of adults and youth throughout Connecticut.About Dr. Christine Montross:A 2015 Guggenheim Fellow in Nonfiction, Dr. Christine Montross is Associate Professor of Psychiatry and Human Behavior at the Warren Alpert Medical School of Brown University. She is a practicing inpatient psychiatrist and performs forensic psychiatric examinations. She completed medical school and residency training at Brown University, where she received the Isaac Ray Award in Psychiatry and the Martin B. Keller Outstanding Brown Psychiatry Resident Award. She received her undergraduate degrees and a Master of Fine Arts in poetry from the University of Michigan, where she also taught writing classes as a lecturer following graduation. She was born and raised in Indianapolis.

Dr. Montross’s first book, Body of Work, was named an Editors’ Choice by The New York Times and one of The Washington Post’s best nonfiction books of 2007. Her second book, Falling Into the Fire, was named a New Yorker Book to Watch Out For. Her latest book, Waiting for an Echo, was a finalist for the Los Angeles Times Book Prize. It was also named a New York Times Book to Watch For, a Time Magazine Book to Read in July and an Amazon.com Best Book of the Month. She has also written for many national publications including The New York Times, The New England Journal of Medicine, Time Magazine, The Washington Post Book World, Good Housekeeping and O, The Oprah Magazine.