WE ARE WATCHING ELIZA BRIGHT: A.E. Osworth in conversation with MJ Kaufman 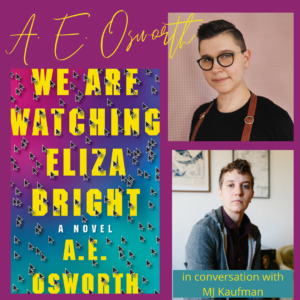 Eliza Bright is living the dream as an elite video game coder at Fancy Dog Games, the first woman to ascend that high in the ranks—and some people want to make sure she’s the last. To her friends, Eliza Bright is a brilliant, self-taught coder bravely calling out the misogyny that pervades her workplace and industry. To the men who see her very presence as a threat, Eliza Bright is a woman who needs to be destroyed to protect the game they love. When Eliza’s report of workplace harassment is quickly dismissed, she’s forced to take her frustrations to a journalist who blasts her story across the internet. She’s fired and doxxed, and becomes a rallying figure for women everywhere. But she’s also enraged the beast comprised of online male gamers—their unreliable chorus narrates our story. Soon, Eliza is in the cross-hairs of the gaming community, threatened and stalked as they monitor her every move online and across New York City. As the violent power of the angry male collective descends upon everyone in Eliza’s life, it becomes increasingly difficult to know who to trust, even when she’s eventually taken in and protected by an under-the-radar Collective known as the Sixsterhood. The violence moves from cyberspace to the real world, thanks to a vicious male super-fan known only as The Inspectre, determined to exact his revenge on behalf of men everywhere. We watch alongside the Sixsterhood and subreddit keyboard warriors as this dramatic cat-and-mouse game plays out to its violent and inevitable conclusion in this thrilling story of resilience and survival.

FREE virtual program, although donations are gratefully accepted. REGISTER HERE.
Signed copies of We Are Watching Eliza Bright are available for purchase through the Mark Twain Store. Proceeds benefit The Mark Twain House & Museum. Books will ship after the event. We regret that we cannot ship outside of the U.S. at this time.
——————
A.E. Osworth is Part-Time Faculty at The New School, where they teach digital storytelling to undergraduates. They’ve spent eight years writing all over the internet, including a stint as Geekery Editor for Autostraddle. Their work has also been published in Quartz, Mashable, Electric Literature, Guernica and Paper Darts, among others.

MJ Kaufman is a playwright and television writer from Portland, OR. Their plays have been seen at the Public Theater, WP Theater, National Asian American Theater Company, Clubbed Thumb, Colt Coeur, Williamstown Theater Festival, InterAct Theater, Yale School of Drama and numerous other theaters and schools around the country as well as in Russian in Moscow and in Australia. Their work has been developed by the Lark Play Development Center, the Playwrights Realm, Page73 and New York Theater Workshop among others. MJ received the 2017 Helen Merrill Emerging Writers Award, 2013 ASCAP Cole Porter Prize in Playwriting, the 2013 Global Age Project Prize, and the 2010 Jane Chambers Prize in Feminist Theatre. MJ has held residencies at the New Museum, MacDowell Colony, and SPACE on Ryder Farm and is currently a resident playwright at New Dramatists. MJ has been a member of the Public Theater’s Emerging Writers’ Group, WP Theater Lab, a core playwright at InterAct Theatre and a playwriting fellow at the Huntington Theater. An alum of Wesleyan University and Yale School of Drama, MJ has taught playwriting at Fordham University, Wesleyan University, SUNY Purchase College, the University of the Arts and as a teaching fellow at Yale College. MJ curated the 2016 and 2017 seasons of Trans Theater Fest at The Brick and, along with Kit Yan and Cece Suazo, founded Trans Lab Fellowship, a program to support emerging transgender theater artists.MJ has also written for Netflix.