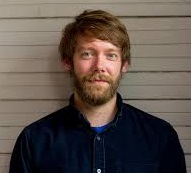 Ethan Rutherford is the author of The Peripatetic Coffin and Other Stories, which was a finalist for the Los Angeles Times Art Seidenbaum Award for First Fiction and received honorable mention for the PEN/Hemingway Award. His short fiction has appeared in Tin House, Ploughshares, American Short Fiction, and The Best American Short Stories. He teaches creative writing at Trinity College.

On Wednesday, February 26, he will read selections from The Peripatetic Coffin and from a yet-to-be published novel and a soon-to-be published collection of short stories.

The evenings begin at 5:30 p.m. with light refreshments and a cash-only wine and beer bar. Readings and discussions start at 6 p.m.

West End Wednesdays is sponsored by the West End Civic Association.
Authors sell and sign books after their talks.