WHAT’S SO FUNNY? With David Sipress and Pat Byrnes (VIRTUAL) 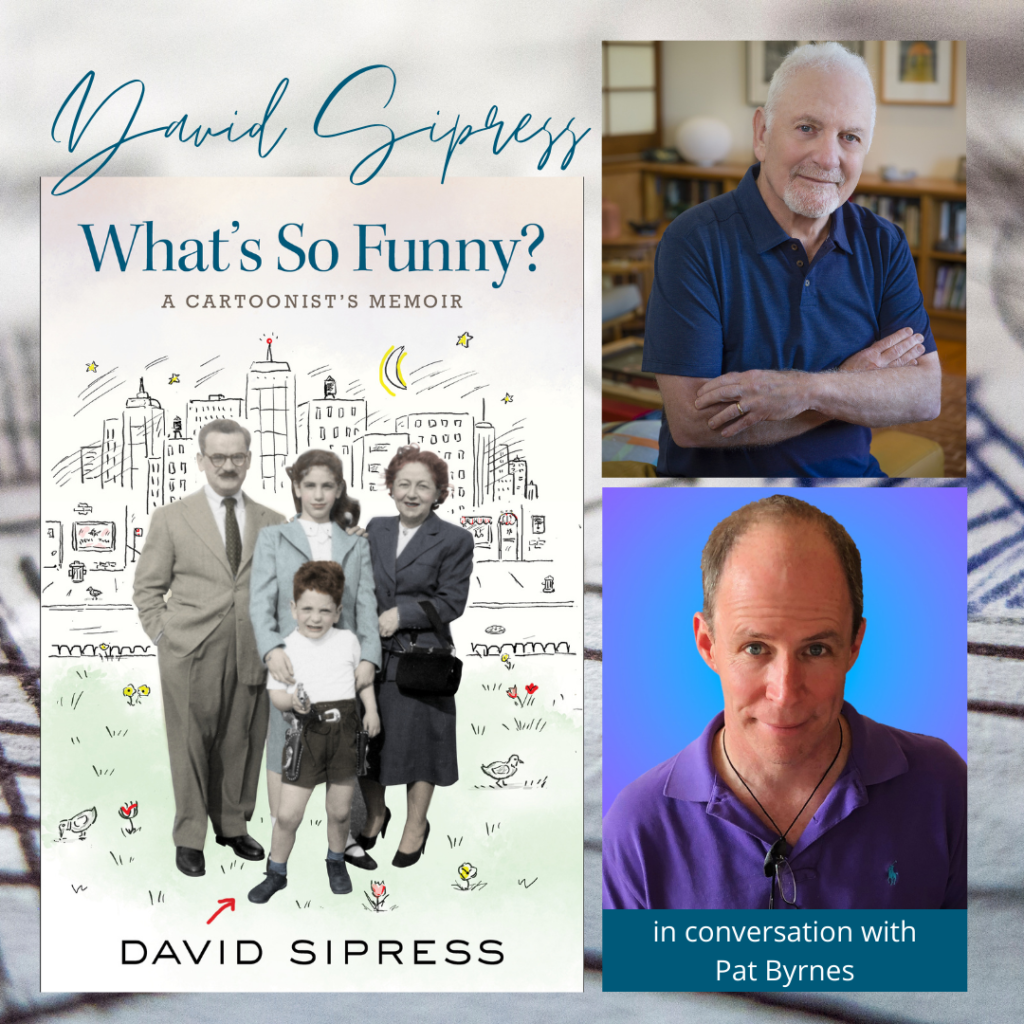 The Mark Twain House & Museum is delighted to welcome two renowned cartoonists to our virtual stage. David Sipress is joined by Pat Byrnes to discuss Sipress’s new memoire WHATS SO FUNNY? an affectionate, introspective memoir chronicling his life story, his mischievous cartooning, and the germination of his ideas.

David Sipress, a dreamer and obsessive drawer living with his Upper West Side family in the age of JFK and Sputnik, goes hazy when it comes to the ceaselessly imparted lessons-on-life from his meticulous father and the angsty expectations of his migraine-prone mother.  With wry and brilliantly observed prose, Sipress paints his hapless place in the family, from the time he is tricked by his unreliable older sister into rocketing his pet turtle out his twelfth-floor bedroom window, to the moment he walks away from a Harvard PhD program in Russian history to begin his life as a professional cartoonist. Sipress’ cartoons appear in the story with spot-on precision, inducing delightful Aha! moments in answer to the perennial question aimed at cartoonists: Where do you get your ideas?

Copies of WHAT’S SO FUNNY? signed by the author are available for purchase through the Mark Twain Store; proceeds benefit The Mark Twain House & Museum. Books will be shipped after the event. We regret that we are NOT able to ship books outside the United States as it is cost-prohibitive to do so.

David has been a staff cartoonist at The New Yorker since 1998. He’s published nearly seven hundred cartoons in the magazine. During the presidential election in 2012, he became the first Daily Cartoonist on The New Yorker website, and repeated as Daily Cartoonist in 2014 and twice in 2016, covering the presidential primaries and the national election. His topical Daily Cartoons continue to appear on newyorker.com in 2021. His cartoons have also appeared in Time, Parade, Playboy, Funny Times, The Washington Post, Harper’s, Men’s Health, Gastronomica, Shambhala Sun, Narrative, Süddeutsche Zeitung, The Spectator, Air Mail Weekly, and numerous other publications and related websites. He was the weekly cartoonist of The Boston Phoenix newspaper for twenty-five years.

David has published eight collections of his cartoons, and his drawings appear in many New Yorker cartoon collections. He was the co-creator, writer, and host of “Conversations with Cartoonists,” a series of onstage interviews with New Yorker artists and has lectured widely on his work and the art of cartooning, including at the Rubin Museum in New York City, the Center for Cartoon Studies in Hartford, Vermont, the Yale Art Museum at Yale University, and Williams College. He’s even lectured on the Queen Mary II, during a stint as the Cartoonist at Sea– a collaboration between Cunard Lines and The New Yorker.

You don’t have to be a rocket scientist to create cartoons, but Pat Byrnes erred on the side of caution, getting his aerospace degree at Notre Dame in 1981. His science skills have languished, however, as he has spent most of the last 25 years following his love of writing, acting, and cartooning – he has been a regular contributor to the New Yorker since 1998.

Pat is the creator of the syndicated strip “Monkeyhouse.” The illustrator of Eats Shoots & Leaves by Lynne Truss, he is also the author of Captain Dad: The Manly Art of Stay-at-Home Parenting. His gag cartoons appeared in book form in What Would Satan Do, as well as in Because I’m the Child Here and I Said So.