WILDLAND: THE MAKING OF AMERICA’S FURY with Evan Osnos and Susan Campbell 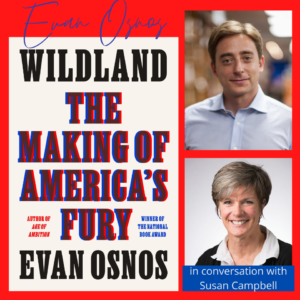 After a decade abroad, the National Book Award– and Pulitzer Prize–winning writer Evan Osnos returns to three places he has lived in the United States―Greenwich, CT; Clarksburg, WV; and Chicago, IL―to illuminate the origins of America’s political fury. Osnos will be joined by Hearst columnist, professor and fellow Pulitzer Prize-winner Susan Campbell.

Evan Osnos moved to Washington, D.C., in 2013 after a decade away from the United States, first reporting from the Middle East before becoming the Beijing bureau chief at the Chicago Tribune and then the China correspondent for The New Yorker. While abroad, he often found himself making a case for America, urging the citizens of Egypt, Iraq, or China to trust that even though America had made grave mistakes throughout its history, it aspired to some foundational moral commitments: the rule of law, the power of truth, the right of equal opportunity for all. But when he returned to the United States, he found each of these principles under assault.

In search of an explanation for the crisis that reached an unsettling crescendo in 2020―a year of pandemic, civil unrest, and political turmoil―he focused on three places he knew firsthand: Greenwich, Connecticut; Clarksburg, West Virginia; and Chicago, Illinois. Reported over the course of six years, Wildland follows ordinary individuals as they navigate the varied landscapes of twenty-first-century America. Through their powerful, often poignant stories, Osnos traces the sources of America’s political dissolution. He finds answers in the rightward shift of the financial elite in Greenwich, in the collapse of social infrastructure and possibility in Clarksburg, and in the compounded effects of segregation and violence in Chicago. The truth about the state of the nation may be found not in the slogans of political leaders but in the intricate details of individual lives, and in the hidden connections between them. As Wildland weaves in and out of these personal stories, events in Washington occasionally intrude, like flames licking up on the horizon.

FREE virtual program, although donations are gratefully accepted. REGISTER HERE.
Signed copies of Wildland will be available for purchase through the Mark Twain Store; proceeds benefit The Mark Twain House & Museum. Books will be shipped after the event. We regret that we are NOT able to ship books outside the United States as it is cost-prohibitive to do so.
————————
About the author:
Evan Osnos is a staff writer at The New Yorker, a CNN contributor, and a senior fellow at the Brookings Institution. Based in Washington D.C., he writes about politics and foreign affairs. He was the China Correspondent at The New Yorker from 2008 to 2013. His first book, Age of Ambition: Chasing Fortune, Truth, and Faith in the New China, won the 2014 National Book Award and was a finalist for the Pulitzer Prize. In 2020, he published the international bestseller, Joe Biden: The Life, the Run, and What Matters Now, based on interviews with Biden, Barack Obama, and others. Prior to The New Yorker, Osnos worked as the Beijing bureau chief of the Chicago Tribune, where he contributed to a series that won the 2008 Pulitzer Prize for investigative reporting. Before his appointment in China, he worked in the Middle East, reporting mostly from Iraq. He and his wife, Sarabeth Berman, have two children.
About the moderator:
Susan Campbell is a distinguished lecturer at the University of New Haven’s Department of Communication, Film and Media Studies. She is also a columnist for Hearst newspapers in Connecticut. She is also an award-winning author of Dating Jesus: Fundamentalism, Feminism, and the American Girl, and the biography, Tempest-Tossed: The Spirit of Isabella Beecher Hooker. Her latest book, Frog Hollow: Stories From an American Neighborhood, was published by Wesleyan University Press in March 2019. The mother of two adult sons, and the grandmother of seven, she has a bachelor’s degree from University of Maryland, and a master’s degree from Hartford Seminary.
Programs at The Mark Twain House & Museum are made possible in part by support from the Connecticut Department of Economic and Community Development, Office of the Arts, and the Greater Hartford Arts Council’s United Arts Campaign and its Travelers Arts Impact Grant program, with major support from The Travelers Foundation. For more information call 860-247-0998 or visit marktwainhouse.org