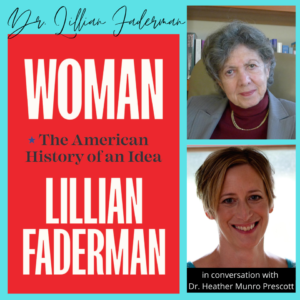 The Mark Twain House & Museum and the Charter Oak Cultural Center are excited to welcome Dr. Lillian Faderman, award winning gender and sexuality scholar, to discuss her new book WOMAN: THE HISTORY OF AN AMERICAN IDEA – hailed as the first comprehensive history of American women to capture the rich discoveries that have been made over the last half century. Faderman is joined in conversation by Dr. Heather Munro Prescott to explore the history behind the struggle to define womanhood in America.

What does it mean to be a “woman” in America? In WOMAN: THE AMERICAN HISTORY OF AN IDEA, Faderman traces the evolution of the meaning from Puritan ideas of God’s plan for women to the sexual revolution of the 1960s and its reversals to the impact of such recent events as #metoo, the appointment of Amy Coney Barrett to the Supreme Court, the election of Kamala Harris as vice president, and the transgender movement.

This wide-ranging 400-year history chronicles conflicts, retreats, defeats, and hard-won victories in both the private and the public sectors and shines a light on the often-overlooked battles of enslaved women and women leaders in tribal nations. Noting that every attempt to cement a particular definition of “woman” has been met with resistance, Faderman also shows that successful challenges to the status quo are often short-lived. As she underlines, the idea of womanhood in America continues to be contested.

FREE virtual event, although donations are gratefully accepted. Donations will be evenly split between the MTHM and Charter Oak Cultural Center.

Copies of WOMAN: THE AMERICAN HISTORY OF AN IDEA signed by the author are available for purchase through the Mark Twain Store; proceeds benefit The Mark Twain House & Museum. Books will be shipped after the event. We regret that we are NOT able to ship books outside the United States as it is cost-prohibitive to do so.

Dr. Prescott’s research and teaching interests include U.S. women’s history, history of medicine and public health, history of childhood, and disability history. Her first book, A Doctor of Their Own: The History of Adolescent Medicine, received the Will Solimene Award of Excellence in Medical Communication from the New England Chapter, American Medical Writers Association. Her most recent book is The Morning After: A History of Emergency Contraception, published by Rutgers University Press in 2011. She is currently working on a book on the a cultural history of Planned Parenthood Federation of America. She has also published articles on the history of medicine in the Bulletin of the History of Medicine, Journal of the History of Medicine and Allied Sciences, and Technology and Culture.

ABOUT THE CHARTER OAK CULTURAL CENTER

Charter Oak Cultural Center, a beautiful historic landmark and vibrant non-profit multi-cultural arts center, doing the work of social justice through the arts. Located in a historic building, the Cultural Center presents multi-cultural arts programming made accessible for free or at a very low cost, the organization provides completely free classes in the arts to 1000 underserved Hartford young people, works extensively with the homeless community, and presents performances and exhibits that bring to light the burning issues of our day.